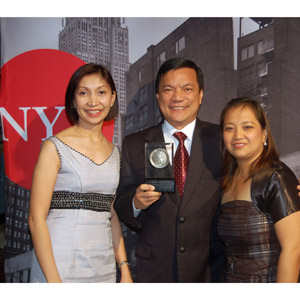 This annual event honors the most original and innovative work in radio broadcasting from around the globe. Works are judged by an international jury of renowned industry professionals representing the top creative minds in their field from 12 countries and spanning five continents.

On March 28, 2007, Filipinos watched in horror when a daycare center owner hijacked a bus (filled with his pre-school students and teachers) parked near Manila's City Hall. Hostage-taker Jun Ducat, the owner of Musmos Day Care Center in Tondo, called DZMM and demanded free education as well as free housing for his 145 pre-schoolers.

As soon as Radyo Patrol reporter Armel Fernandez broke the story, DZMM geared up for a special coverage and deployed reporters to the scene to get more information and a clearer picture of the situation at hand.

"The biggest breakthrough came when DZMM got hold of Jun Ducat, the hostage-taker himself and as it turned out, it was only through DZMM that he could be contacted. "It also became the link between Ducat and the worried parents of school children," said ABS-CBN vice president for Manila Radio Division Peter Musngi.

DZMM veteran anchors Ted Failon and Korina Sanchez served as a bridge for Ducat and the proper authorities—from the Education Department, to Social Welfare Department and, most importantly, the National Police—for his demands. After ten hours of tension, the hostage drama ended when Ducat agreed to surrender and release the hostages at 7 p.m.

"Throughout this, DZMM reported with prudence and acted responsibly, thus, avoiding a tragic ending to this crisis. The station again lives up to its commitment of being first in news and public service without causing harm and endangering others," said Musngi.

Aside from winning the silver prize, DZMM was also a finalist in the Talk Show Host category. Station manager-anchor Angelo Palmones was cited for his science-oriented show Bago Yan, Ah!