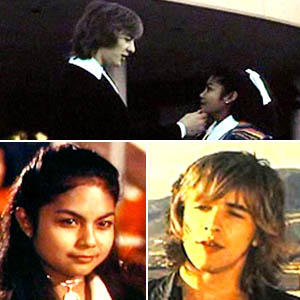 Above: A scene from Lollipops And Roses, the movie Nora Aunor shot in Los Angeles, California, U.S.A. Seen with Nora in this scene is the young Don Johnson. Inset left: Nora, aged 17 was already a Superstar. Right: The 21-year-old, Don Johnson, who rumors said, really fell for Nora. Don refers to her as "brown doll" in their movie.

It's a shame when young stars of today do not recognize the personalities and real stars who contributed a lot to the development local showbiz. But it just plain irritates a lot of people when newcomers and "star" wannabes become swell-headed and see themselves as "superstars" after doing one or two movies or after starring in a couple of TV shows.

These showbiz upstarts have no idea what a real "Superstar" is.

A Superstar is someone who has thousands of supporters, who treat the star as their queen or king, not only in their youth but throughout their whole life. The Superstar's fans withstand the heat of the sun and the cold rain just to wait and follow their idol during any event—loyalists who would fight and virtually die for their idol. They would even name their offspring after their Superstar.

A Superstar is someone whose love life is always colorful, always watched and talked about.

A Superstar has stories and legends that blur the line between fact and fiction.

And as we all know, Philippine showbiz has only one Superstar—Ms. Nora Aunor.

Here's the first of the three "urban legends" about her.

WHEN "THE DON," FELL FOR THE "BROWN DOLL." In 1970, Nora Aunor, did the movie Lollipops and Roses. Produced by Premiere Productions, it was touted as one of the most expensive movie productions of that time, having been shot in Hollywood, Los Angeles, California, and even hiring foreign talents.

When the movie was finally shown in the Philippines, it was an instant hit. Lollipops and Roses set the record for being the first Filipino movie to be shown not only in "masa" theaters, but also in first-class, "Hollywood movies only" theaters such as the Greenhills and Magallanes theaters. The movie was shown for six months in theaters all over the country, raking in a lot of money for Premiere Productions and, of course, for the Superstar Nora Aunor.

Fast-forward to the ‘80s: The hit U.S. TV detective series Miami Vice was all the rave among fashion-mad, music-loving, hip-crazy kids who emulated the way the characters in the show talked, moved, and wore their clothes, particularly one of the show's lead stars, Don Johnson.

Veteran showbiz writers, and especially, fans of Nora Aunor, recognized Don as one of the two U.S.-based talents that Premiere Productions hired to star with then 17-year-old Nora Aunor in the movie Lollipops and Roses. (The other Hollywood star was Davy Jones, lead singer of the ‘60s rock n'roll band The Monkees.)

Don played the son of the Nora character's foster parents in the States. In the movie, Don was extra-nice to Guy because he had a crush on her. "She's a brown doll," Don's character said of Nora. He showed her around while Nora was in L.A., and even sang The Carpenters' "Close To You" in a duet with Guy in one scene. He was trying to get Nora's attention away from his rival in the movie, Pinoy actor Victor "Cocoy" Laurel.

Some showbiz writers and fans insisted that "The Don" really fell for Nora and the two became a couple while Nora was in the States. Nora, they said, was nursing a broken heart after her breakup with Tirso Cruz III—her reel and rumored real sweetheart when she was still working for Sampaguita Pictures—and Don was at the right place and at the right time. He courted Guy and they had a short fling.

And as the story goes, the fling ended before Nora returned home. They never saw each other afterwards.

Nora reigned as the Philippines' Superstar through the rest of the ‘70s, until the early part of the ‘90s, while Don, after unsuccessful attempts for Hollywood stardom, finally hit it big when he was cast in Miami Vice with Philip Michael Thomas.

Nora didn't talk too much about her relationship with Don, certainly not about tales that could be easily dismissed as plain rumor.

But was the tryst between Nora and Don a fact or urban legend?

INTERVIEW WITH A NORANIAN. Nestor de Guzman is a Noranian, as fans of the Superstar call themselves. In fact, he is the editor of the Noranian book, Si Nora Aunor Sa Mga Noranian: Mga Paggunita at Pagtatapat, a collection of stories he compiled from different hardcore Noranians who shared their memories and experiences as the Superstar's die-hard fans.

PEP (Philippine Entertainment Portal) finds his credentials sufficient enough for him to qualify as a resource person who can shed light on the Nora-Don fling story.

Lollipops and Roses, he added, was just one of the two movies Nora made while she was in the U.S. The other was The Singing Filipina under Tower Productions, the movie outfit co-owned by Artemio Marquez, who directed Nora in this movie and in Lollipops and Roses. Director Marquez is the father of actors Joey Marquez and Melanie Marquez.

Sajid Khan, PEP found out, was an Indian actor who already made a name in Hollywood as early as the 1960s. He was a teenage sensation during the ‘60s and, Nestor revealed, was Nora Aunor's "M.U."

Sajid, Nestor recalled, left the country without even seeing Nora. Nestor said, Nora's reason for not seeing Sajid was not just because of her rumored reunion with Tirso Cruz III or Pip. There was more to Nora's situation in 1971 that made seeing Sajid impossible for Nora.

(TO BE CONTINUED NEXT WEEK)