Judy Ann Santos and Ryan Agoncillo: Once upon a love story 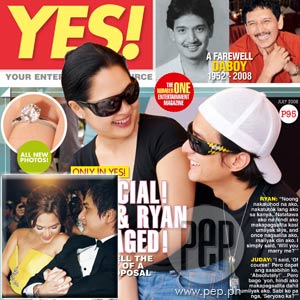 At first, Judy Ann Santos and Ryan Agoncillo tried to hide their relationship from the public, but their “holding hands” moments in several showbiz events betrayed how so much in love they were.

Last May, Ryan Agoncillo finally decided to pop the magical question to his girlfriend of three years, the young superstar Judy Ann Santos, “Will you marry me?”

For more than a month, the couple managed to keep their engagement away from the public, until the July 2008 issue of YES! confirmed it in an exclusive interview with the couple. Juday, as she is popularly called in showbiz, and Ryan gave the details of the marriage proposal, which happened during the 30th birthday celebration of the actress.

Here’s a flashback to the days when Juday and Ryan were still in their “holding hands” phase.

FROM ‘HELLO-HI’ TO LOVE TEAM. In an article written by Nitz Miralles for the July 2005 issue of the defunct showbiz publication Hi!, Ryan said that his first two encounters with the then 27-year-old actress were casual and uneventful.

“Our first encounter was at the studio of Raymund Isaac. She was there for a pictorial at ako nama’y nasu-shoot for an ad. Sabi ko lang, ‘Hello,’ at nag-‘Hi’ naman siya. I just know she was Judy Ann Santos at in-assume kong she knew who I was.”

The second time, according to Ryan, was at a certain salon. “Nagpapaayos siya and I was having a haircut. Again, hi and hello pa rin ang exchange of words namin. Sa Krystala lang talaga kami nagkakilala nang husto.”

The 29-year-old actor-TV host was one of the three leading men of Juday in the 2004 TV fantaserye Krystala on ABS-CBN. Ryan played the character Miguel who ended up as the husband of Tala (Judy Ann).

Before the series concluded in 2005, it was bruited about that the two main actors were already together.So, when the finale of Krystala came, people started to ask, “Did Ryan also end up as Juday’s boyfriend?”

HOLDING HANDS AND SWEET MOMENTS. The couple first refused to answer the nagging question from the press. But their actions in several showbiz affairs strongly suggested the real score between them.

On the night of the Luna Awards in May 2005, Juday arrived with her escort, none other than her “on-screen partner” Ryan. The two were already being rumored as a couple. But not anymore for the people who saw them together that night.

A month later, Juday and Ryan appeared ever more sweet as a couple when they attended the Urian awards—holding hands and hugging each other every now and then.

Judy Ann received a Best Actress award, her first-ever Gawad Urian for her movie Sabel (2004).Her acceptance speech gave an additional clue that she and Ryan were already in a relationship. At the end of her speech, she said, “Thank you, Ryan.”Later on, when TV crews asked about it, she just said, “Alam na ni Ryan ’yon kung bakit ako nag-thank you… at amin na lang ’yon.”

Since the couple did not want to publicly admit their relationship, YES! interviewed Mommy Carol, mother of Judy Ann, for a confirmation. Mommy Carol could not even verify it, however, because when she confronted them, the two did not answer her directly.

KASAL, KASALI, KASALO. After Krystala, Juday and Ryan looked like they were inseparable in doing movie and TV projects. When Ryan starred in Umaaraw, Umuulan (2006), Juday made a cameo appearance.They even had another TV series together, Ysabella, on ABS-CBN in 2007.

Then their fans got even more excited when the couple teamed up in the movie Kasal, Kasali, Kasalo (2006). Since they would be playing the role of a couple who would get married, Juday and Ryan were again asked about their wedding plans. But they said they didn’t have any definite plan yet.

The following year, a sequel for that movie was made, Sakal, Sakali, Saklolo (2007). In the story, Juday and Ryan were already playing the role of a married couple. Again, they were asked about marriage plans. There were even rumors that the wedding would happen this year, November 5, 2008. But the couple denied this and said that they have to save up for it first.

THE MUCH-AWAITED ENGAGEMENT. Ryan finally popped the question that everybody had been waiting for during the 30th birthday of his girlfriend last May 14 at the Antulang Beach Resort in Dumaguete City, Negros Oriental.

Even before the actual birthday of Judy Ann, there were already rumors that Ryan would give a diamond ring to his girlfriend as his gift. No one could verify if this was already an engagement ring. A PEP source, who was close to the couple, was not even sure about it when asked a day after the birthday of Judy Ann.

Fans waited patiently for Juday and Ryan to talk about the ring. Although the engagement rumor kept getting stronger, people respected the couple for being mum about it.

The waiting game took more than a month before they finally gave the full details of the engagement in a tell-all interview with YES! magazine in this month’s issue.

NEXT, WEDDING BELLS.Fans are now just waiting for the exact plans for their wedding. What’s definite thing is that it’s going to be a simple wedding.