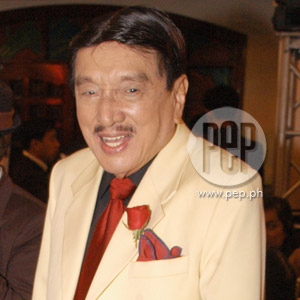 Dolphy's first big-screen gay portrayal was in 1954 when he did Jack and Jill. For all the conservatism in the ‘50s, the Comedy King didn't have to struggle in playing a homosexual role. As he recalls in his autobiography, Hindi Ko Ito Narating Mag-isa: "Mayro'n akong mga uncle na gano'n," he candidly confessed. "No'ng minsan nagpunta ako sa sayawan nila para makita ko sila ng malapit. Nagkita k

Reaching the age of 80 while still on top is truly rare in a fickle world like showbiz. Rodolfo Vera Quizon, simply known as Dolphy, did exactly that last July 25 when he celebrated his 80th birthday. Making the occasion even more special was the launching of his autobiography titled Hindi Ko Ito Narating Mag-isa. The book was compiled by actress-writer Bibeth Orteza.

He’s the unsurpassed King of Comedy in our local entertainment industry. Along with the accolades are all the myths and legends surrounding the man. But by telling the story of his life, Dolphy would have people gain a deeper understanding of the comedy icon both as an artist and as a person in real life.

Tracing the many firsts in Dolphy’s life and inspiring career, PEP (Philippine Entertainment Portal) lists the five we discovered in his autobiography. There are more revelations and fascinating side notes to be discovered in the book, of course. But we leave all that for the public to unearth by buying the book.

FIRST LOVE. “One could fall in love many times during the course of a lifetime, but the first rush of love always holds a special place in our hearts.” So goes a line we once read about first love.

And yes! Even a renowned ladies’ man like Dolphy had his own taste of first love. In Dolphy: Hindi Ko Ito Narating Mag-isa, the Comedy King divulges the name Aida Javier. She was his first love.

“She could play the piano well because she was from a family of musicians, but she was really a dancer,” confides Dolphy to writer Bibeth Orteza.

Dolphy describes Aida as “maganda ang mukha at ang katawan.” She was older by two years. Dolphy was only 18 at the time of the affair.

He was young, madly in love, and full of hope. “Masayang-masaya ko. I was thinking, sana ito na, sana kami na.”

Dolphy and Aida eventually parted ways, leaving him in shambles. “Umiyak ako,” he confesses. “Oo, I was crying talaga for a while. Talagang mayro’ng nights na iniyak ko talaga.”

The book tells in detail how Dolphy, then still unknown, strove to win back his lost love but to no avail. Years later, the now famous Dolphy bumped into Aida by chance. Their short exchange after not seeing each other for several years is recounted in the book in vivid detail.

FIRST SEXUAL EXPERIENCE. Before his full blossoming as a man and as an actor, Dolphy was a shy and awkward teenager.

Dolphy received his first dose, courtesy of a “hostess” working in Paco. It wasn’t romantic, what with conditions during the Japanese occupation, which saw frequent blackouts. They were holed up in a friend’s house, Dolphy recalls. “Ginapang ako noong isa, e, hindi naman ako makakibo, pinabayaan ko.”

Dolphy’s first portrayal of a gay character was in 1954 via the film Jack and Jill. In his autobiography, Dolphy reveals how easy it was for him to portray a sensitive role, even in that particularly conservative period.

Dolphy was in this state when he crossed paths with ABS-CBN’s Eugenio Lopez Jr., called “Kapitan” by his colleagues and staff, the network executive asked Dolphy flat-out if he was interested to appear on television.

Dolphy’s TV debut was Buhay Artista. For his talent fee, the ace comedian received P500 per show, which was about two-hundred pesos higher compared to his radio fee. When Dolphy decided to try his hand at producing movies through his own RVQ outfit, he asked Mr. Lopez’s permission to use Buhay Artista as RVQ’s first project in 1966.

Dolphy paints his relationship with Mr. Lopez as “very good.” He would carry those good memories to heart and the feeling was mutual. During the time the Comedy King was once again struggling to regain control of his career, it was ABS-CBN who paved the way for his return by entrusting him with the sitcom Home Along Da Riles in 1992. The show went on to last until 2003.