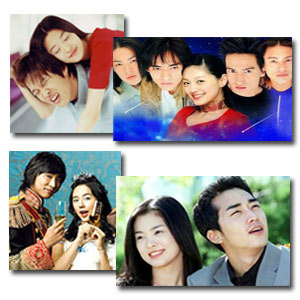 Aside from their beautiful compositions, the creativity of our Filipino musicians can be recognized in the numerous "tagalized" songs that draw the attention of music buffs.

Music is a universal language and we Pinoys have our own ways of enriching it. Not only do we have Original Pilipino Music (OPM), local composers/singers have creatively written their own Pilipino versions of foreign songs. Poets, too, have done many translations, although these have yet to reach wider audiences—Pete Lacaba, YES! executive editor, for one. It was he who coined the term salinawit for his unpublished volume of "tagalized" love songs.

PEP's Top List this week covers the more popular salinawits of soundtracks for foreign television shows. But, first, just to warm up—

Recently, Warner Music Philippines released a music album that contains ten "tagalized" versions of foreign songs. Among these are "Lawlaw" ("Low" by Flo Rida), "Payong" ("Umbrella" by Rihanna), "Binibining Ganda" ("Beautiful Girls" by Sean Kingston), "Sundalong Bata" ("Crank That" by Soulja Boy), and "Isisi Mo Sa Akin" ("Sorry, Blame It On Me" by Akon). It also has "Lampa" ("Clumsy" by Fergie), "Sa'yo" ("With You" by Chris Brown, "Sugat sa Puso" ("Bleeding Love" by Leona Lewis), and "'Wag Mong Pigilan" ("Don't Stop the Music" by Rihanna).

Before this album was released, some Pinoy music artists already used the lyrics of some foreign songs to create a new ones. Some of these popular translations were derived from old songs—"Hindi Ako Si Darna" by Janine Desiderio (from the song "Superwoman" of Karyn White) and "Banyo Queen" of Andrew E (from the song "Stand By Me"originally sung by Ben E. King).

Some listeners find these songs annoying while the others just laugh about them. Anyway, as we mentioned, this is not the first time that Filipino music artists "tagalized" foreign songs. There are also original soundtracks of foreign TV series and movies that are worth noting for their Pilipino translations. Here are the songs:

"Ang Puso Ko'y Tutuloy." No guessing needed here—of course, it's "My Heart Will Go On," from the super-blockbuster Titanic (1997).

He translated the song word for word. For example, the chorus: "Malapit, malayo, sa'n ka man naroon (Near, far, wherever you are) / Alam ko na puso ay tutuloy (I believe that my heart does go on) / Minsan pa binuksan ang pinto (Once more you open the door) / Nandito ka sa 'king puso (And you're here in my heart) At puso ko'y tutuloy-tuloy (And my heart will go on and on)."

"Ikaw." This song was used in the local version of Autumn in My Heart, the first installment of the four-part Koreanovela Endless Love. Faith Cuneta, known for singing most of the theme songs of Koreanovelas shown in the country, gave her Tagalog rendition of Song Hye Kyo's "Reason." This was one of the original soundtracks of Autumn in My Heart.

"Can't Help Falling in Love." Following the success of the Taiwanese TV series Meteor Garden, Josh Santana (under Star Records) performed the Tagalog version of one of the show's original soundtracks titled "Qing Fei De Yi," which was originally sung by Harlem Yu.

The lyrics are quite simple, which others may find "corny and cheesy" about a boy who admired a girl but could not tell her. It was so easy to sing that it immediately became a hit among music lovers, especially the teeners who loved the show and the boy band called F4.

"Ang Hanap Ko (Ang 'Yong Pag-ibig)." While Josh Santana sang the salinawit of the upbeat soundtrack of Meteor Garden, Michelle Ayalde performed the Tagalog version of this other original soundtrack of the phenomenal Taiwanese series.

"Ang Hanap Ko" used the lyrics of Penny Dai's mellow song titled "Ni Yao De Ai." This was one of the reasons Michelle, former member of the quartet called Full Circle, was hailed as the "Princess of ‘Tagalized' Pop" during her time.

The song's lyrics evoked the feelings of Shan Cai and Dao Ming Si, the main love team of Meteor Garden. Theirs was a simple love story of a poor girl-rich guy always being torn apart by Dao Ming Si's mother.

"I Believe (I Love You)." This Korean song was the theme song of the popular Korean romantic-comedy film titled My Sassy Girl. Just like the movie, Shin Seung Hun's song was translated into different Asian languages, including Pilipino, which was performed by acoustic singer Jimmy Bondoc.

The movie My Sassy Girl was such a hit that it even had a Hollywood version with the same title. Jesse Bradford and Elisha Cuthbert played the main characters. The story was about a college student who met a drunken girl at a train station. Little did he know this meeting would be the start of their "relationship" in the future.

The first two stanzas expressed the feelings of the male lead star's character in the movie. Although he was not sure about the girl's feelings towards him, he believed they were meant to be together:

"Pag-ibig nga Kaya." This love song was used in the Tagalog version of the Koreanovela Princess Hours. It was one of the most popular television series in Korea in 1996.

Princess Hours is about Crown Prince Gian who married a commoner named Janelle in order to take over the royal throne in case the ailing King died. Despite Prince Gian's lack of feeling for her, love would eventually bloom between them and they would re-marry in the latter part of the series.

The original theme song titled "Perhaps Love" (or "Sarang In Ga Yo" in Korea) was used to create a song performed in a duet by former lovers Christian Bautista and Rachelle Ann Go. This was done with the permission of Munhwa Broadcasting Corporation, which ran the series on Korean television.

Aside from these original soundtracks, there are many other foreign songs that our Pinoy musicians have translated into our own language. For example, the ballad "Broken Vow," popularized by Josh Groban, was given the Pinoy touch by Sarah Geronimo and Mark Bautista.

All this just goes to show that no matter in what language a song is composed—English, Korean, Japanese, etc.—as long as it captures Pinoy music lovers, there will always be salinawits.