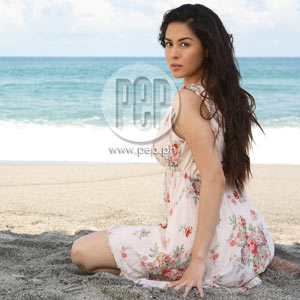 "Noon, commercial talent. Ngayon, leading lady na," says Marian Rivera in one of her many product endorsements. This is exactly how one can describe the showbiz career of the 24-year-old Caviteña.

Nobody knew her when she was still a commercial talent. But after she was launched as the Philippine version of the heroine in the Mexican telenovela Marimar, every other Filipino recognized her as the actress with a bright future in show business.

PEP (Philippine Entertainment Portal) now looks back on how she became one of the biggest stars today.

EARLY ROLES. Like most showbiz wannabes, Marian started out as a commercial talent before she entered the world of acting.

In an interview with YES! magazine (January 2008), Marian recalled that it was the assistant of Popoy Caritativo, her current talent manager, who gave her an offer she couldn't refuse.

Apparently, Mr. Tuviera remembered Marian in one of her previous commercials and wanted make her the lead star of an afternoon soap opera. She consulted her mother, grandmother and even her father, who is a Spanish restaurateur. They were all hesitant for Marian to join the crazy world of showbiz, but she was determined to try her luck.

So, she agreed to do the role of Clarisse, the leading lady of Oyo Boy Sotto, in Kung Mamahalin Mo Lang Ako (2005). This was followed by a short stint in the movie Enteng Kabisote 2: Okay Ka, Fairy Ko (2005)and two other afternoon teledramas, Agawin Mo Man ang Lahat (2006) and Pinakamamahal (2006). Also in 2006, she signed an eight-picture contract with Regal Entertainment.

Becoming a big star in local showbiz was not easy for Marian. Like other celebrities, she got roles that were far from her age.

She was only 22 years old when she accepted mother roles in GMA-7's afternoon teleserye Muli (2007) and primetime fantaserye Super Twins (2007). Some observers thought her career was already laying low.

Marian admitted to YES! that she felt sad by the roles she was getting. Nonetheless, she took things positively, saying that the roles helped her show the audience her versatility in acting:

THE NEXT BIG STAR. Marian was a psychology student at the De La Salle University in Dasmariñas, Cavite. Even then she was determined to make it big in the industry she was starting to love. And so, when GMA-7 announced an audition for the lead character of Marimar, the young actress started to internalize the role-she practiced Marimar'sdance moves diligently, trimmed her figure, and dared herself to wear a two-piece bikini (her first time ever) in the audition.

All her efforts paid off. Marian got the title role of the Philippine remake of Marimar (2007). Soon, on her birth month (August), then 23-year-old Marian Rivera was declared "the next big star" by GMA-7 president and CEO Atty. Felipe Gozon. (Click here to read related article: http://www.pep.ph/news/14336/GMA-7-declares-Marian-Rivera-its-Next-Big-Star)

The teleserye's mass appeal, particularly her successful team-up with hunk actor Dingdong Dantes, was such a hit that it consistently topped the primetime ratings. In fact, it even broke the record of the original Marimar, which rated 46.5 percent, by getting 49.5 percent for one of its episodes in November 2007.

And so, more windows of opportunity opened up for Marian in movies and product endorsements. Marian was in the cast of two official entries to the 2007 Metro Manila Film Festival, Bahay Kubo and Desperadas. Last February, she starred with Richard Gutierrez in the Valentine movie (GMA Films) My Best Friend's Girlfriend.

Her commercial endorsements almost tripled from the number of products she was endorsing while she was still starting in the business. She became an image model for a communications company, and for brands of shampoo, ladies' wardrobe, denim pants, fruit drinks, yogurt, and even signature bags.

CAN SHE SING? After proving her versatility as an actress, Marian surprised her followers with a dance album that instantly hit the music industry.

Although Marian never expected it, the sales of her album, Marian Rivera Dance Hits, has reached double-platinum.

This Caviteña has already proven that she's her fame-she can act, dance, and even host a TV show. Now comes the question: Can Marian also sing?

UPCOMING PROJECTS. Aside from her fantaserye Dyesebel, Marian is currently busy doing photo shoots for new product endorsements. She will also have a movie with her screen partner Dingdong and another Kapuso artist Iza Calzado titled One True Love. She's also excited about her next TV project, which she refused to divulge, after Dyesebel.

What's making her even busier is her month-long birthday celebration (her birthday is August 12) together with Dingdong Dantes, who celebrated his 28th birthday last August 3. Both are preparing for their grand birthday celebration, which they dedicate to their avid fans, on August 27 at the Araneta Coliseum, Quezon City. (Click here to read related article http://www.pep.ph/news/18523/PEP-EXCLUSIVE:-Marian-Rivera-still-works-non-stop-as-she-celebrates-24th-birthday)