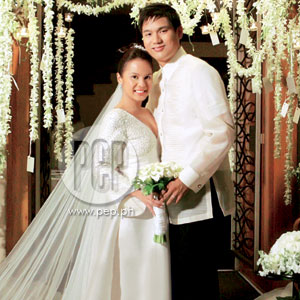 Seven has always been a lucky number for singer-actress Nikki Valdez. She says good things happen whenever the number pops up. "Pag tinignan mo sa Bible, it means completion and perfection," she explains. So imagine the threefold blessing and happiness she and her Filipino-Canadian groom, Christopher Lina, received on their wedding day, July 7, 2007. In figures, that date comes out as 7/7/7.


Nikki and Chris must have been fated to meet. On January 21, 2003 (note that 21 is divisible by 7), a friend dragged Nikki to Suburbia, a bar in Malate, to watch the band Side A. The Toronto-based Chris happened to be in Manila for a business side trip and was spending his night out in Suburbia.

A mutual friend introduced the two, and Nikki and Chris swapped numbers. After she left the bar, he immediately texted, asking if they could have dinner.

Nikki declined that first invitation. But Chris was persistent, calling and texting her even when he was already in China. Nikki didn't know he was in China when she replied to one of his text messages, inviting him to her birthday party on January 25, 2003.

The long-distance relationship lasted for four years, with both of them logging up frequent flyer miles to meet each other every month. It wasn't an easy set-up, given their schedules, but they survived the distance and constant longing.


They didn't even mind the age gap between them and the differences in their professional and personal backgrounds. Chris is now 38, has been working 15 years as a sales manager for Lexus, the luxury-car company, and has a 15-year-old son, Julian, with his former wife.

Nikki is 10 years younger, admittedly bratty at times, and always tied up in showbiz commitments such as ABS-CBN's primetime drama Walang Kapalit, and doing promotional tours. But she says she brought sunshine to Chris's serious world. He embraced their differences, and she accepted the instant responsibility of being a stepmom.


Last year, on July 22, at around 9 p.m., Chris popped the question that left the hard-to-surprise Nikki speechless. She had assumed something big was about to happen when he invited her to dinner at their favorite restaurant, the Old Manila at the Manila Peninsula hotel in Makati.

After dinner, Chris pretended he had forgotten something in his room and insisted they get it.


Dessert had been brought up to the room, and they weren't through with it yet when Chris suddenly fished something out of his pocket—a platinum band ring.


"Lumuhod ang lolo mo. As in, nag-kneel siya on one knee, 'tapos sabi niya sa 'kin, ‘Will you love me for the rest of your life?' Doon ako umiyak."

Unknown to many, Nikki and Chris first tied the knot in civil rites in Toronto on Valentine's Day, last February 14 (note that 14 is also divisible by 7). According to Nikki, they needed the civil wedding for her spousal visa papers. That was a simple yet solemn occasion, attended only by close family and friends.


The couple, however, have chosen to celebrate July 7 as their official anniversary. That's a date that should be easy to remember: 7/7.