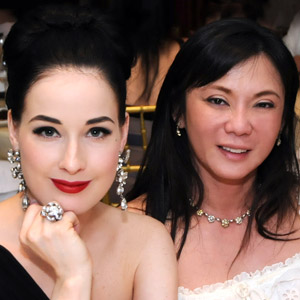 Dr. Vicki Belo played host to more than 700 guests at the 18th anniversary party of Belo Medical Group held last August 8 at the grand Rizal Ballroom of Makati Shangri-La. The highlight of the said event was the strip-Teese portion of Dita von Teese (click this LINK to catch a glimpse of her sizzling numbers).

The country's ambassador of beauty, Vicki Belo, pulled out all the stops for the 18th anniversary of her beauty empire, Belo Medical Group. The Venus Ball (note the initials V.B.) was held at the grand Rizal Ballroom of Makati Shangri-La last August 8.

The night's theme was a Venetian Masquerade and the guests—a mix of top socialites and celebrities—gamely dressed for the occasion.

His physique in excellent condition after the recent Bench Blackout, Dingdong Dantes started the evening garbed in the costume of ancient Rome (think Brad Pitt in Troy or the hunky men of 300) but later changed to a dapper suit to be the perfect escort to sweetheart Karylle.

Of course, Tessa Prieto-Valdes was not to be outdone as she filled her candy pink Edwin Tan gown, with its matching cotton-candy Marie Antoinette wig, with authentic Venetian masks.

The place was set up beautifully. The foyer of the ballroom was made to replicate Venice for picturesque photo-ops. Murals of the intricate canals and ivy-covered windows of the Italian city lined the walls of the room. There was an actual gondola and handsome gondoliers to pose with. A masked announcer even called out the entrance of each guest, like they did at royal balls in the olden days.

Apart from the excellent food and overflowing bubbly wine, guests were treated to performances by the country's top acts. Sarah Geronimo clad in a striking Rajo Laurel ball gown, embroidered with roses, showed off the strength of her voice, singing "Time to Say Goodbye," which has been sung by greats like Andrea Bocelli and Sara Brightman.

Regine Velasquez, one of Belo's oldest clients and top endorsers, and Lani Misalucha each gave brilliant performances as well. Hip-hop sensation Billy Crawford kept it upbeat with his team of dancers.

The much-awaited performance was that of international burlesque star Dita Von Teese. According to Saga Events head honcho Robbie Carmona, it was a long-time dream of Dr. Vicky to bring Ms. Von Teese to the country to perform and she finally did it for her special anniversary.

The pin-up star performed twice, first at 9:30 p.m. and later again at 11:30 p.m. Twenties-style pin curls, porcelain skin, and deep-red lips made her look like a Vargas painting come to life.

Her first act revealed her in a brilliant crystal covered bustier with a train of lush red feathers. She was seated coyly on a swing in a golden birdcage. Her dance was simple and mesmerizingly sensual and she made the act of stripping down to her jeweled undergarments look utterly glamorous and classy. Even the women were entranced by her every movement.

The finale showcased her very famous martini glass routine. Again Dita came on stage wearing an evening gown covered in pure crystals. Even her long gloves and evening shoes were studded in the same crystals. She performed every act so lovingly and gracefully that even the art of removing her stockings was done elegantly. She finished off by swimming in a large martini glass, popping the champagne in celebration. The crowd was on its feet, applauding when she was through.

If anyone knows how to celebrate, it's Vicki Belo. With a captured audience of 700 guests, she also took the chance to tell everyone about her new foundation, Ike and Nena Belo Foundation, named after her parents. The charity will focus on helping people with cleft palettes, burn victims, and other deserving patients who truly need her help.

A final line from the AVP cleverly quotes her saying, "I want to make the country more beautiful, one person at a time." Cheers to that!