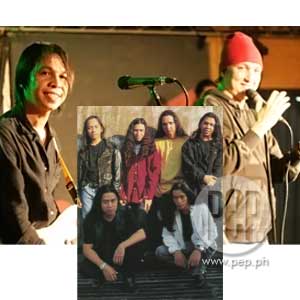 Alamid became popular in the music scene via the first single "Your Love," which the band initially deemed as "baduy" but eventually became their ticket to fame. Alamid guitarist Dexter Facelo (left) and vocalist Gary Ignacio (right) composed the said song.

Alamid is always thankful for the rain that cancelled the second of Bon Jovi's two-night concert. If not for it, the band wouldn't have been discovered and signed to a record deal on November 4, 1993.

That Warner executive happened to be Eugene Villaluz, the former New Minstrels singer, and he liked one of their original songs, "Your Love."

A week after, the band was signed a recording deal with Warner and was immediately in the studios recording their first album.

The recording process would take about three months to finish. But their now trademark song "Your Love" was released a month earlier, in January of 1994. Dexter said, "Kumbaga hindi pa tapos yung album, ipinaparinig na."

"Ayaw pang ipasabi na Filipino," Gary added about the marketing ploy of the record company not to introduce the band immediately.

It was in the noontime musical show, the now defunct Sa Linggo nAPO Sila on ABS-CBN, where the band made their first television appearance. Even the hosts of the show, the trio of Apo Hiking Society, were surprised that a local band created that song.

BEGINNINGS. Alamid was formed during the high school days of Gary Ignacio and Dexter Facelo at St. James Academy in Malabon. The two are the only remaining originals of the band when they were signed up.

Dexter narrated that he was playing for another band called Ardourn Delirium, an all-male band with Myra Ruaro as their vocalist. On the other hand, Gary was vocalist for Boy Next Door, where all his bandmates were females.

But Gary's band disbanded due to an unfortunate incident that happened to one of his bandmates. He formed Athena's Curse with Dexter's brother Thallie Facelo. They played punk music, which later turned to gothic when Dexter came aboard as keyboardist.

"May nagsasaksakan pa," Dexter said, but would be quick to correct that punk music was not all that bad.

When the first Club Dredd in Timog closed down in February 1993, the band decided to change their name.

The decision to change their name also started to turn things around for them as Stag Beer wanted them to do a jingle for their campaign, "Isa Para sa Lahat, Lahat Para sa Isa." The beer company wanted them to have a name that had tough Filipino aura.

The band then decided to go for Alamid, so that they would always go first, alphabetically, in billings during shows.

And the fortunes for the band changed as well with the change in name. They also created a fan base in Mayrics, another favorite spot for groupies in the ‘90s.

SUCCESS FOR THE BAND. Alamid was known for sporting long hair even if their popular hit was a rock ballad.

Even with the success of their rock ballad, "Your Love," the band would also churn out other hits like "China Eyes" (the intro of this song would be the recurring theme for ABS-CBN sitcom Palibhasa Lalake), "Just Wasn't Brave Enough," and "Still Believe in Love."

The second album entitled Panaginip, was released in 1995.

"Batibot," the theme song of the popular children's show of the same title, was also recorded in the same album.

Both band members narrated that in one of their concerts, they had the puppets and mascots of Batibot.

THE LIE LOW. But things would turn bad for the bad as changes happened to them.

They changed their manager while working on their third album. The change also coincided with the change of people in Warner, and this had a major impact on the band as the new management became heavy on promoting "radio friendly" songs.

"Pagdating" was the lone single which was able to make it to the record charts of radio stations.

They decided to lie low and venture into out of the country shows. Their stops included Japan, Bahrain, Qatar, Dubai, Hong Kong, and Camp Lemoneir, a US military base in Djibuti. In between, they also did their rounds traveling the country, and also played at Kalipay in Manila Baywalk.

The band is hoping to make a comeback in the music scene given the resurgence for 90's rock music. The band members also hope for the repackaging of their 2005 album, Anting-Anting, which they produced independently with their current line-up—Gene Mitra, Jun Pineda, and Jex Herradura.