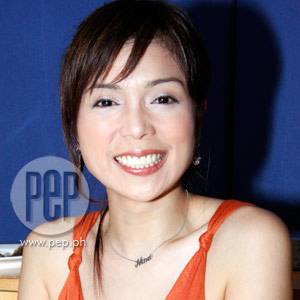 A year after her separation with former boyfriend Nyoy Volante, Soul Siren Nina is a picture of contentment. She admits finding a new love although she would rather keep the details of the romance to herself.

Nina is back with a brand new album under Warner Music Philippines, Nina Sings the Hits of Diane Warren. This time the Soul Siren pays tribute to the critically-acclaimed American songwriter whose past hits include "When I See You Smile," "Because You Loved Me," "How Do I Live" and "Love Will You Lead Back," and a string of others.

Nina first rendered a Diane Warren number back in 2004 when she recorded "I Don't Want to Be Your Friend" for the compilation Diane Warren Presents: Love Songs. The Soul Siren is actually an ardent fan of Warren since way back. Nina and Diane have yet to see each other in person, although they talked once on the phone when Nina thanked the Grammy Award-winning songsmith for allowing her to record the songs.

In a very touching gesture, Diane even wrote a letter to Nina saying: "A few years ago Nina cut, ‘I Don't Want To Be Your Friend,' one of my favorite songs. I am very happy that she is now coming out with an entire album filled with the songs that I'm proud of. Hopefully, this is just the beginning of a lot of hits together. Thank you."

The message was printed in full and was included in the album's inlay.

NEUTRAL FEELINGS. Despite popularizing original songs like "Jealous" (2002) and "Someday" (2006), Nina's biggest selling record Nina Live! released in 2005 contained covers of popular love tunes. One of the singles "Loves Moves In Mysterious Ways"—a Julia Fordham original—was so successful that the song became associated with Nina as if it were her own.

Last year, Nina paid tribute to American singer-songwriter Barry Manilow by dishing out the album Nina Featuring the Hits of Barry Manilow. With the release of her latest disc, many were left wondering if the Soul Siren is resigned to do predominantly cover songs instead of risking an original number.

"It's fulfilling to sing any song, maybe a cover or an original song, just the fact that I'm singing is fulfilling enough," she told the entertainment press yesterday, July 29, at Red Box in TriNoma Mall in Quezon City.

She is not worried about being typecast as a singer known for recycling previous hits. Being a music fan and an entertainer, Nina doesn't see anything wrong in rendering cover tunes.

HAPPY IN LOVE. Of all the songs in the album, Nina's favorite is "I Could Not Ask ForMore." The song was popularized by alternative-rock singer Edwin McCain.

Blushingly, Nina described the song's significance in her present situation: "If you are in a situation where you're happy, of course you could not ask for more. And if there's a person who could make you smile, just feel blessed that this person could turn around a sad moment into happy moment."

PEP got curious and asked her to elaborate after the press conference. "I'm happy talaga," she smiled, "may mga shows ako hindi ako ngaragan, unlike before noong nagsisimula ako, talagang may show ka dito, after lilipat ka dito. Ngayon talagang plantsado lahat. If they want to get me on this date, kung meron akong show dito sa ibang day pumapayag naman sila."

Even her love life is turning up rosy and that explains even more why she could relate to the message of "I Could Not Ask For More."

"It has something to do with that also because siyempre may inspiration ka. Happy din kasi kahit papaano meron kang reason why you are singing this song."

Nina admitted that she and ex-boyfriend singer Nyoy Volante haven't spoken to each since their bitter breakup. The two singers separated last year, blaming lack of time due to their busy schedules. But a rumor also came out saying that Nina broke up with Nyoy because she fell in love with someone else.

She has moved on obviously and has found a new love in the arms of a non-showbiz boyfriend. "Siya [Nyoy] din naman," Nina quickly added.

Asked if she's willing to greet Nyoy if ever their paths cross sometime in the future, Nina playfully replied, "Oo naman. Siguro tinginan [then] okay, bye."