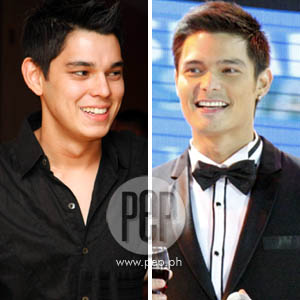 "He has better things to do and I have better things to do. So instead of wasting energy or contemplating things that don't really exist, let's just do our jobs," says Dingdong Dantes (right) about being pitted against Richard Gutierrez (left).

Although both Dingdong and Richard were given well-deserved importance during the show—Dingdong was the highlight of the Bench Body portion while Richard's walk on the ramp was the finale—some viewers believe that Dingdong made a greater impact than Richard. This prompted others to compare the response between the two Kapuso leading men, and therefore cry foul over what they perceive was injustice to the one who got lesser attention.

The most vocal among them is none other than Richard's mom, the incomparable Annabelle Rama. She lamented what she felt was "unfair" exposure of her son during the fashion event—Richard was covered with dark makeup, no name flashed on the screen to identify the celebrities taking on the catwalk, etc.

On Dingdong and Richard's part, both young actors felt satisfied with their performance onstage. They also agree that there's nothing to argue or fight about since they both did their best to satisfy the audience's expectations.

Words were already said and feelings were hurt. But for Dingdong, this controversy will not change his friendship with Richard.

But did he anticipate that things would go so far?

Dingdong also believes there is nothing to settle since he has no problem with Richard.

What can he say about the observation of some people that the response of the audience inside the Big Dome was based on the gimmicks of the celebrity models? In Dingdong's case, he dropped his pants to show his underwear.

Has he talked with Bench owner Ben Chan about the issues that are coming out?

What can he say about those who defended him, like Richard Gomez?

"The show, it involves thousands of Filipinos inside the Dome and hindi naman lahat ng hilig nila ay pare-pareho. So, kanya-kanya lang ‘yan. For those who believe in me, thank you very much. Kumbaga, gusto ko lang sabihin na hindi nabale-wala ang paghihirap ko."

What was his reaction to the statements of Annabelle Rama?

"Kung meron man siyang sinasabi, naiintindihan ko naman siya. I do not take it against her," Dingdong replied.

Although Richard started his career as a child star, along with twin brother Raymond Gutierrez, he took a long break from showbiz and returned as a teen star via GMA-7's Click in 2001. That time, Dingdong was already making a name for himself as a romantic leading man in the primetime soap Sana Ay Ikaw Na Nga after graduating from teeny-bopper roles in Anna Karenina and T.G.I.S.

Dingdong is four years older than Richard; Dingdong turned 28 last August 2 while Richard is now 24. Aside from belonging to the same network, Dingdong had the chance to direct Richard in some of the episodes of Kakabaka Adventures, a defunct teen-horror show in GMA-7. They also had the chance to work together in SOP, although both eventually decided to leave the show.

So, it can be said that Dingdong and Richard have already developed a friendship through the years. But does Dingdong really consider Richard a friend?

"Oo," he answered. "Isa siya talaga sa mga taong humahanga ako. Magmula nang mag-umpisa siya, I was there when he started. I'm very proud and happy how he handled it [his career]."

Dingdong admitted that he has yet to talk to Richard after the issue between them came out. But does he have anything to say to Richard?