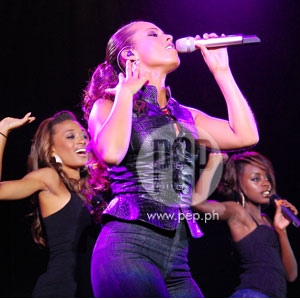 Eleven-time Grammy winner Alicia Keys had the SMX Convention Center roaring, "More!!!" not just once, but twice. Luke Mejares and Duncan Ramos were her front-act men.

The venue was changed at the last minute due to the unpredictable weather, but that did not matter to the excited fans who crammed the SMX Convention Center last night, August 5, to catch the live performance of Alicia Keys.

At 9:45 p.m., the crowd let out a loud scream upon hearing the powerful voice of Alicia saying: "Good evening, Manila! How are you all feeling tonight? Are you feelin' good?"

Then she segued to, "Baby, baby, baby/ from the day I saw you/ I really, really wanted to catch your eye/ there's something special 'bout you/ I must really like you..."

The song is titled "You Don't Know Me," a certified hit single included in her seven-time platinum album The Diary of Alicia Keys.

On her fifth song, she endearingly asked the crowd, "Is it okay if I play my piano tonight?" The Pinoys yelled, "Yeah!" So she struck the piano keys and started singing "Karma," one of the pieces that made her very popular in the country.

Everyone quieted down this time, letting the lady, who began playing classical music at the age of seven, and her enchanting piano keys pervade the air.

The next number became a wonderful collaboration between Alicia and her bandmates. She rearranged "How Come You Don't Call Me," and asked "help" from Amanda, one of her back-up vocals , to give a sample of her high-octaved voice; Jeff, the guitarist, to strum for the audience; Steve's bass guitar to mimic Alicia's low notes; Brian to blow his trumpet and impress the audience.

She also sang "Superwoman," a wonderful cut from her latest album As I Am, and simply left the spectators gaping in awe. And then she did her own version of Force M.D.'s "Tender Love" with Germaine Paul, her male back-up. The portion was truly soulful.

Upbeat bestsellers "No One" and "My Boo" had the people dancing and singing along with Alicia. And, of course, Pinoy's all-time favorite "If I Ain't Got You" was her final song. All in all, she performed 19 songs.

In closing, Alicia Keys, who has sold more than 20 million albums, was overwhelmed by the response of Pinoys. "You are all beautiful," she said. "Thank you for real love, real support, and real heart." She ended the night with a promise: She will return!

Fans weren't in for elaborate costumes, or grand stage set-up, or awesome choreography that night. Only Alicia and her beautiful keys.