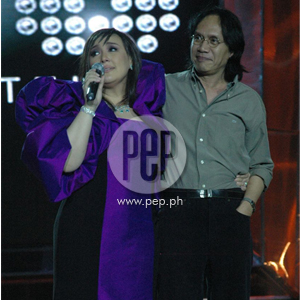 Sharon Cuneta and the man who wrote her first hit song, Rey Valera. The two perform "Kahit Maputi na ang Buhok Ko," another piece from the composer of "Mr. DJ."

Thirty years after she first sang "Mr. DJ," Sharon Cuneta performs the same piece again in front of her adoring fans at the Big Dome on August 8.

The Megathirty concert begins with a video presentation summing up the colorful showbiz career of the Megastar. Indeed, one of the biggest nights of the Megastar becomes a walk down the memory lane. Once again, the crowd hears Sharon's chart toppers, the famous movie lines from her box-office movies, including her commercial jingles.

Sharon enters the stage with the piece "Kahapon Lamang," then segues into a remix version of "Mr. DJ" and "High School Life." The crowd is very still, as if recalling the good memories evoked by the songs.

A NIGHT OF REMINISCING. Sharon showcases another talent that evening: storytelling.

The mother of three recalls the early years of her career.

At 11, she was still playing patintero when her Tito Sen summoned her to his office on Aurora Boulevard. Tito Sotto was then the president of Vicor Music Corporation. She recorded "Tawag ng Pag-ibig," which was a "medium hit." And when she released "Mr. DJ," "that's when the ball started rolling."

At 14, she was asked to sing the theme song of her idol's movie Tubig at Langis. The female lead, Vilma Santos, had just given birth to her firstborn, so it was the soundtrack singer who rode the float. The Cebu crowd loved her. The next day, a movie offer came.

THE MEN IN MEGAMOVIES. Sharon has more than 50 movies attributed to her name, most of which are best remembered for the lines that earned her acting trophies. And of course, they are also remarkable because of her onscreen chemistry with reel partners.

She asks the audience: "Sino'ng na-in love?" A few raise their hands.

She then sings the soundtrack of her romantic movies from past to present. And the pleasant surprise? Some of her leading men make an appearance onstage.

She also offers a song for the musician who composed her first hit, Mr. Rey Valera. It's truly heartwarming to see a very shy Rey share the same stage with Mega and sing "Kahit Maputi na ang Buhok ko."

The Mega gets emotional when she belts out "Ikaw," her song for "the man who gave her forever"—Senator Francis "Kiko" Pangilinan.

But the most stirring moment is her duet with eldest daughter, KC Concepcion. Dear Heart is replayed once again, while their mom-and-daughter photos are shown on the screen. "I don't know if that's God's plan. I guess it was, because we have a beautiful daughter from that union," says the Megastar about her first movie with the dad of Kristina Cassandra.

Other names that topped Shawie's thank you list: Her mom Elaine Cuneta; her boss in ABS-CBN, Charo Santos; and the man who discovered her hosting skills, German Moreno.

WELL-APPLAUDED. The dance number of Powerdance is simply amazing. The popular group of Douglas Nieras interprets the "una at huling" dance hit of Sharon, the "I-swing Mo Ako."

Shawie's "To Love Again" is merged with "How Did You Know?" hit of Gary Valenciano, her "favorite prayer partner." The total effect leaves the spectators mesmerized.

The number with Martin Nievara is also notable. Together, they perform "Ikaw" and "Ikaw Ang Aking Pangarap."

But the best part is seeing the Megastar, Mr. Pure Energy, and the Concert King sing together. Louie Ocampo, the musical director, rearranged "Pangarap ng Bituin" and the number is truly astounding.

For the finale, Sharon renders the timeless "Sana'y Wala Nang Wakas," with composer Willy Cruz by her side.

STAR-STUDDED CROWD. The Big Dome is jampacked, and a number of celebrities are spotted in the patron area.

Also present is the "kapatid" of the Megastar, Judy Ann Santos, who is accompanied by friend Beth Tamayo. Megastar look-alike Ara Mina is there. Vina Morales is seated beside Kuya Germs. Precy Ejercito, Bayani Agbayani, Sandara Park, Faith, and the singing wonder from U.K., Charlie Green, also watch the concert.

The "Mr. DJ's Pet" has come a long way. She's become the one and only Megastar of Philippine showbiz, and a big influence in the life of every showbiz fan. Almost everyone present that night can claim, "I grew up with Sharon."