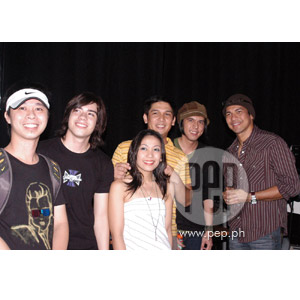 Gary Valenciano is undoubtedly an icon even to modern day bands and artists. Here, Gary joins the members of Rivermaya and Imago's Aia de Leon for a photo op at the Mag:net Café in Bonifacio High Street, Taguig City.

Gary Valenciano is a certified pop singer. A man epitomizing what a textbook mainstream entertainer should really be: clean, likable and pleasant at all times—far from the cliché image of a young, delinquent rock n' roll musician.

But good music is always good music regardless of image, labels or genres. And it's a credit to Gary V that his songs have been able to transcend barriers and generations to withstand the passing of time, not to mention fast-changing music trends and fads. Although it is hard to imagine a guitar slinging heavy rocking musician bopping away (or mushing) to a Gary V tune, fact remains that the man dubbed as "Mr. Pure Energy" influenced a lot of artists, including a slew of contemporary bands today.

PEP (Philippine Entertainment Portal), in celebration of Gary's 25 years in the entertainment industry, asked some of our local rockers about their most favorite Gary Valenciano song and why.

JOREL CORPUS. For a band known for dishing out hard rocking tunes served with in-your-face riffs and straightforward lyrics, it is quite surprising to know that Kjwan are avid fans of Gary.

J-Hoon described the song as a carefree number. "Gary V to me is very inspirational to the people, with his calling and everything. He's got the whole Philippines in his songs, so this song is very innocent, away from the serious message."

He also said that although Kjwan has always been typecast as a heavy sounding unit, all five members maintain a soft spot when it comes to good pop songs with irresistible hooks.

"It's nice," J-Hoon said, still pertaining to his fave Gary V. song. "It's a light song even though we make a lot of heavy songs, still any light song always catches us."

PAOLO VALENCIANO. Inheriting his father's love for music, Paolo Valenciano is part of the band called Salamin. As for his favorite Gary V song, "It would have to be ‘Take Me Out of the Dark.'"

The young Valenciano admitted that he is not particularly fond of some of his dad's Christian singles, but he singled out "Take Me Out of the Dark" as "something else talaga."

QUARK HENARES. Maverick director Quark Henares is considered in the scene as the quintessential "rock n' roll director." Aside from directing a handful of music videos from mainstream to underground bands, Quark is also known for his off-beat movies mirroring his obscure influences. He currently shares frontman duties with designer Mich Dulce in a band dubbed as Us-2 Evil-0.

AIA DE LEON. Imago's vocalist Aia de Leon counts Gary V's "Take Me Out of the Dark" as an inspirational hymn that saved her life during her angst-filled days.

"Nung bata ako it always reminds me nung maliit ako na there's always somebody up there, who's taking care of me, who loves me no matter who I am. So, nung time na lumabas ‘yon [the song] marami akong naging problems nun so that song kind of anchored me into a God that is all powerful, that is above everything else."

JAYSON FERNANDEZ. Rivermaya's frontman, Jayson Fernandez, looks too young to even be paying tribute to a veteran artist like Gary Valenciano but he swears that he is a fan and that he's familiar with the songs of Mr. Pure Energy.

JULIANNE. For a female performer, Julianne could definitely give any male guitar virtuoso a run for his money. During the time she was just starting to play the guitar, one of the first few songs that Julianne learned to pluck was "Take Me Out of the Dark."

GABBY ALIPE. Urbandub's Gabby Alipe credited Gary Valenciano as one of the local artists who truly inspired him to create music when he was a kid. There's a lot of Gary V songs to mention but one that really caught his attention was the infectious single, "'Di Bale Na Lang."

What about you? What's you favorite Gary V. piece?