Gab Valenciano wants to make his own name as executive producer 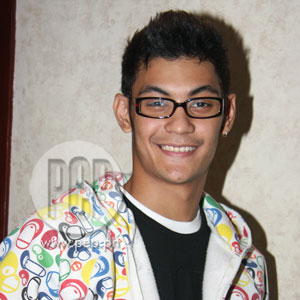 "Gary V., nobody else can compare with him. But if you really think about it, we are into different things. Dad is a singer, dancer. Ako I want to be a director, music producer," says Gab Valenciano on his desire to make his own name in show business.

"States is in the process already, papers are being processed, most likely December ako aalis. Nakakalungkot, because I'm enjoying what I'm doing right now, I enjoy the company of people I work with, but I have to leave for something that I really want to be—to be an executive producer. I also want to work on a Christian film, I wanna emphasize yung mga Christian films, not yung mga cheesy na pag nakita mo, sasabihin mong baduy ‘yan. I wanted something different, that's what I wanna do."

MAKING HIS OWN NAME. Advantage ba for him ang pagkakaroon ng amang katulad ni Gary Valenciano, as far as making a name in show business is concerned?

"It's both a yes and no. Yes, because he's Gary V., nobody else can compare with him. But if you really think about it, we are into different things. Dad is a singer, dancer. Ako I want to be a director, music producer.

"I wanna make my own name, but not to take away the essence and meaning of being a Valenciano. My dad paved the way na for the name Valenciano. People gave so much respect to us because of that. I don't wanna take away that, but I also want to make my own niche and name in the business."

"As always, he exceeded my expectations and other people's expectations. He's a superstar, but at home, he's just a normal person. Yung tipong he will cancel certain events just to be with us. We grew up that way and I'm very thankful to my dad. He separated his being a superstar from being a being a father and that's my biggest appreciation. I wanna be like my father when I have my own family someday."

"We're okay now. The other day, magka-text kami. We both moved on. I'm very happy where we are right now. I'm happy with her career."

"I'm not allowed to work outside school. I can't adjust my own sked, so, I will not really have that time for anybody. The idea of having a girlfriend is not advisable right now."