The numbers that sparked a word war 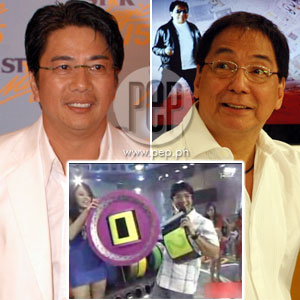 "Explain before you complain." This became a catch-phrase during the peak of the "Wilyonaryo" controversy that happened a year ago.

Earlier this month, a video started to circulate a month after Eat Bulaga had a special episode in Los Angeles, California. The video captured Joey singing his views on what would happen if there's no GMA network.

Reacting immediately was Willie who appeared in Wowowee last August 19with his co-host Pokwang to defend her from Joey's mockery.

Pokwang kept her chin up but not after her daughter reported that her schoolmates teased her for having a vampire as mom.

Joey never answered back. However, in Eat Bulaga's comedy skit "Ang Joke Ko," Joey de Leon again used the word "aswang." In the said segment he, together Vic Sotto and Jimmy Santos, was bragging about his grandmother's confrontation with an "aswang."

When asked what her grandmother's name was, he quipped, "Po... Po... Puring!"

But one year ago, the fight between the Wowowee and Eat Bulaga hosts was no joke.

Remember the "Wilyonaryo" scandal? PEP (Philippine Entertainment Portal) looks back to the incident that ignited the war between Joey de Leon and Willie Revillame.

One of the wheels used in the game contained both the numbers "0" and "2". These numbers represented the money a contestant could possibly take home, either zero or two million.(Click here to read related story)

"Wilyonaryo" let the contestants chose of the colored wheels, and then asked if he or she wanted "Wilyonaryo" or "Winame."

The winner of the game that day could choose "Winame" (meaning, "Uwi na ‘ko") and take home Willie's offer. Or he could say "Wilyonaryo," which meant the chance to win P2 million.

Willie was supposed to show where the two million was placed. He took the violet wheel and repeatedly said that inside was the P2 million jackpot. When he pulled a card from the wheel, however, it showed "0" instead of "2."

Willie, on the other hand, instantly said while laughing, "Mali, mali, sandali... ang two million... ay hawak ko na!" Then, he handed the film in his hand, which contained the number "2," to one of the dancers of the show.

When PEP tried to get the side of Wowowee with regard to this incident, an ABS-CBN executive said that it was an honest mistake and that Willie unintentionally pulled the strip that contained number "2" so the number "0" appeared, which was said to be the base of the wheel. (Click here to read related article)

That same day, Willie was in tears as he shared his feelings about the "Wilyonaryo" controversy and Joey's constant remarks about it.

MTRCB MEDIATES. Chairperson Consoliza Laguardia of the Movie and Television Review and Classification Board (MTRCB) intervened in the endless word war. She commanded the two hosts to stop hitting each other on television.

Willie also had a meeting with Chairperson Laguardia about the issue. Since then, there were no comments coming from both parties that came out in noontime shows. (Click here to read related article)

GOVERNMENT REACTS. This controversy did not only draw the attention of MTRCB but also the other government offices.

During the exchange of words between Joey and Willie, Senator Manuel "Mar" Roxas, chair of the Senate trade and commerce committee, expressed his intention to investigate the alleged rigging of ABS-CBN noontime variety show Wowowee.

He even said that it would start once the necessary information had been collected from the Department of Trade and Industry (DTI) and other concerned parties.

The DTI organized a fact-finding team to investigate the incident. It was composed of the Consumer Welfare Trade Group, Bureau of Trade Regulation Protection of DTI, representatives of the MTRCB, Kapisanan ng mga Brodkaster ng Pilipinas (KBP), and a consumers' organization.

The panel probed the controversy for two months and released its recommendations on November 9, which led to the filing of administrative case against ABS-CBN in connection with the defunct "Wilyonaryo" segment of Wowowee. (Click here to read related article)

AFTERMATH. Although the word war stopped, a viral video was released in YouTube showing Wowowee hosts and a contestant rehearsing for the "Wilyonaryo" game.

In that video titled "Kita Mo?" Willie Revillame was seen practicing pulling the film strip from one of the wheels. On his first try, the wheel showed a bold black line. On the second pull, it displayed a different figure.

In a different press statement, however, ABS-CBN stood firm in saying that the Kapisanan ng mga Brodkaster ng Pilipinas (KBP) had cleared Wowowee over the "Wilyonaryo" scam. KBP was one of the members of the fact-finding panel organized by DTI.

In fact, its legal counsel, Atty. Rudolf Jularbal, reiterated in a press statement that their Standards Authority Committee found that there was no cheating, after the Committee investigated the equipment used in the game and interviewed Wowowee's production staff.

After the "Wilyonaryo" controversy, both Joey and Willie stopped making sarcastic comments about each other. The battlefield was silent until another viral video started to circulate the "aswang" issue. And as the saying goes, history repeats itself.