KC Concepcion talks to "Marie Claire" magazine about working for the U.N. 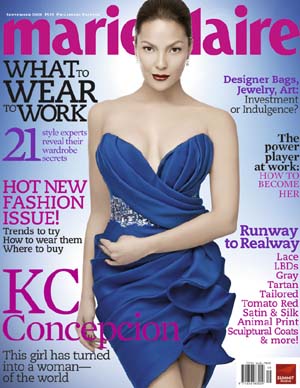 An album, a movie, and numerous endorsements keep this 23-year old lady busy, but she manages to find time for her advocacies as Philippine ambassador of the U.N.'s World Food Programme.

To say that KC Concepcion lives a life in the public eye is merely stating the obvious. One would expect a fishbowl existence for the daughter of Megastar Sharon Cuneta and matinee idol Gabby Concepcion.

"It's kind of like The Truman Show," she tells Marie Claire magazine in their September issue, "When I saw that movie, I was moved because I felt like a big chunk of my life isn't like the rest."

It's an extraordinary life, indeed.

KC has what most young ladies her age can only dream about: a thriving showbiz career, prized endorsement deals, an adoring public, and the attention of the most sought-after bachelors.

But she surprises us by moving away from the glitz and glamour, and towards something that brings her right back down to earth—working for the U.N. "I always remind myself that movies and music are entertainment, but my work with the U.N. is reality," she tells Marie Claire, "But I also know I wouldn't have been in that position had I not been exposed in entertainment. So I know that they kind of work together in that way."

KC is serious about her role as Philippine ambassador of the U.N.'s World Food Programme, which runs projects for children in Mindanao. One of her advocacies is ending world hunger. She explains, "It's the most logical thing to fight for. [But] to end hunger, you have to inform yourself, do research, know what the situation is, just how bad it is in the Philippines; or how much better or worse it is compared to Africa and Myanmar."

Her advocacy has become more important following the fighting since August between government and the Moro Islamic Liberation Front in areas of North Cotabato, Lanao del Sur, Lanao del Norte and Maguindanao. The World Food Programme is giving rice to the 220,000 people there that have been displaced by the fighting. KC also remains committed to the Virlanie Foundation, one of her favorite charities introduced to her by Marie Claire in 2006.