Movies based on novels 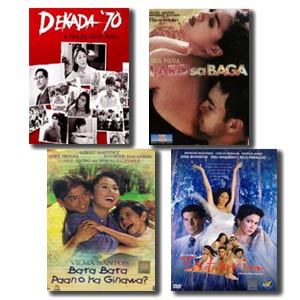 The novel is one literary genre that's rich in unforgettable characters and their lives. What happens when literary imagination crosses over to movies? Will the film experience be as memorable as its source? Find out in some of the film adaptations that hit movie buffs.

Novels, short stories, legends, and folklore have been part of people's lives since childhood. These literary works bring readers into a world that they imagine for themselves as they visualize scenes and get to know the characters.

On the other hand, filmmaking is an artistic genre in its own right (although not as old as novels or our own indigenous epics). Producers, directors, and screenwriters who adapt novels for the big screen face a big challenge—translating literature into sensual images with immediate mass impact.

Creative filmmakers have the artistic license to modify the plot and characterization, and to exclude details of the novel. Yet successful adaptation means that the movie retains the original message and general flow of the story, while giving moviegoers a completely new experience.

Indeed, who can argue that the movie adaptations of J.K. Rowlings's Harry Potter series, and of J.R.R. Tolkien's trilogy Lord of the Rings, weren't blockbusters of all time?

Renowned film director Lino Brocka dramatized the tragic love story of Julio (Bembol Roco), who came to Manila to find his long-lost love, Ligaya (Hilda Koronel). On a shoe-string production budget, cinematographer Mike de Leon, who directed his own great films in the ‘80s, depicted the poverty and filth of urban life as organic setting for the tragedy .

This film won the Best Picture, Best Screenplay, Best Actor, Best Cinematography, Best Director, and Best Supporting Actor at the 1976 FAMAS Awards. It has been consistently included in the world's 100 films of all time, the only Filipino film entered in the book 1001 Movies You Should See Before You Die.

Bata, Bata, Paano Ka Ginawa, as in the novel, depicted a woman's empowerment. If in the past, women were perceived as followers of male members of the society, in this moving picture, a new-aged woman was presented through the character of Lea (played by veteran actress Vilma Santos). The heroine Lea (Vilma Santos) starts out as an old-fashioned wife whose only goal is to take care of her children and serve the needs of her man. (Not that it's wrong per se.) But eventually she realizes her own worth as a person and becomes involved with social issues, like women's rights.

The movie gave several acting awards to Vilma Santos and Albert Martinez; and directorial awards to Direk Chito Roño. It also gave way for then young stars Carlo Aquino and Serena Dalrymple to show off their acting skills.

Laro sa Baga (2000). This film adaptation was another directorial work of Chito Roño. Based on the novel by Edgardo Reyes, the story is about a young couple who fell in love while exploring the politics of sexual awakening and social relations. The political dynamics led to deceit and violence. This sex-themed film won the Best Picture award during the Gawad Urian 2000.

Tatarin (2001). This movie adapted the short story of National Artist Nick Joaquin, "Summer Solstice." It was directed by Amable "Tikoy" Aguiluz from the script by screen writer Ricardo Lee.

Tatarin was about the relationship of a husband and wife in the 1920s. It showed the transformation of Lupe (Dina Bonnevie) after she took part in the liberating sacred feast called "tatarin." From being a submissive and devoted wife to her husband Paeng (Edu Manzano), Lupe became a rebel by attending the final rite of "tatarin" with Amanda (Rica Peralejo).

Dekada '70 (2002). Another movie based on the novel of the same title by Lualhati Bautista, who also wrote the screenplay, and directed by Chito Roño. Set in 1970s, the story showed how the middle-class family of Amanda (Vilma) and Julian Bartolome (Christopher de Leon) struggled and faced the challenges during the Marcos dictatorship.

As in her other novels, Lualhati used a female character to witness the changes in Philippine society during Martial Law. Amanda was a housewife who had to deal with her five sons, each having different traits and orientation in life—a government reformer, a U.S. Navy man, a human- rights activist, a delinquent, and an innocent teenager.

This historical film tied with another movie titled Mga Munting Tinig for the Best Picture award in the 2003 Gawad Urian. Besides the acting award given to the Star for All Seasons, Piolo Pascual received the Best Supporting Actor award for his portrayal of Jules Bartolome, the eldest son of Amanda. Dekada '70 was the Philippine's official entry to the 76th Annual Academy Awards, Foreign Language Film category.

Hihintayin Kita sa Langit (1991). This tragic-romance movie, directed by Carlos Siguion-Reyna, was based on Emily Bronte's only novel Wuthering Heights. Although the movie was not based on a local novel, we've added it to the list because it's considered one of the most unforgettable Filipino movies. It featured the tandem of Richard Gomez and Dawn Zulueta.

The movie was about the passionate love between a rich girl Carmina (Dawn Zulueta) and an abandoned child named Gabriel. Their love story did not have the usual happy ending because a series of events separated them from each other and turned the love into hatred and revenge.

The movie was so memorable for GMA Films President Annette Gozon-Abrogar that she asked its screenwriter, Racquel Villavicencio, to rewrite it for another film adaptation titled The Promise.

These movies have proven the creativity of our local directors and screenwriters to squeeze a novel or complex story into a two-hour film adaptation without losing the original emotional content.

With so many literary works around us, surely there will still be more film adaptations in the future. What other literary stories do you think will make a good movie?