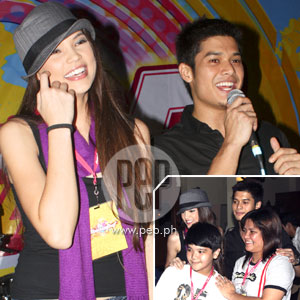 La Lola stars Rhian Ramos (left) and JC De Vera gamely posed with the Fanatxt-ers (inset). The former was so cool about the "meet and greet" concept of the event that she felt so at ease chatting with fans. She even gave a wacky pose during photo-op.

Super funnnnnnnnnn! Sobra!" exclaims a fan during the fifth anniversary party of Fanatxt at Jimmy's Bar and Grill in Timog Avenue, Quezon City, on August 30, 2008.

As early as 7:00 p.m., the place is already jam-packed. Right in front of the stage is the fans, having dinner.

In one corner of the venue are the Sexbomb dancers, preparing for their dance number. The said dance group jumpstarted the mobile services of Fanatxt, which was launched five years ago. "Proud kami dun," says Rochelle Pangilinan.

Lovi Poe, who's presently working on her second album, is also among the early birds. She sings Freestyle's "So Slow" and D'Sound's "Tattooed on My Mind" later that evening.

At past 9:00 p.m., JC De Vera and Rhian Ramos, lead stars of upcoming TV series La Lola, show up. The two are seen chatting with their fans and having photo-op.

German Moreno also drops by before proceeding to his late-night show Master Showman. He even gives his own rendition of classic piece "Dahil Sa Iyo."

I.T.A.L.Y. star Jolina Magdangal also graces the event, and sings the carrier single of her album Destiny, "Will of the Wind," with a Fanatxt subscriber.

In between the eating, jamming, dancing, games and raffle—a band called Bats keeps the mood upbeat with their songs.

Kim Idol of Zirkoh Comedy Bar and Buboy of Takeshi's Castle are the affair's hosts.

Evert Lateo, GMA NMI's (New Media Inc.) head of business development for mobile, explains that the concept of the event stems from a promo, dubbed as Fanatxt Funtastic Five, which started last August 1.

She relates, "Those people, mga fans yan, so 40 yan, and then we invited top Fanatxt celebrities. It's a fans day, meet and greet..."

It's not hard to miss the 40 people she's referring to. They are at the V.I.P. area hobnobbing with celebs and having a grand time!

Kapuso talents are obviously glad to have that moment with their fans. But to say that the Fanatxt-ers are ecstatic would be an understatement—they own the night and truly shine more than the stars!