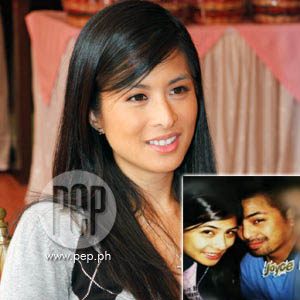 Ricky earlier asked Joyce to describe her upcoming wedding. Joyce excitedly related, "It's 9:30 in the morning. So, it's a day wedding and then the reception is an afternoon reception. So it's more casual than anything. It's not a coat and tie." Joyce expected "around 200" guests.

How did they decide to get married in the U.S and not in the Philippines?

"Nakakalungkot, but the reason I had it here, not only is my family here, but most of his family is based here. He doesn't have family in the Philippines. So if I had it in the Philippines, it would have been only be good for me. Siyempre naman, we're trying to be fair to each other," explained Joyce.

"Ah no, not at all!" Joyce said. "I kept it very quiet. I just wanted everything to have fallen in place as possible. I wanted to be it on my own."

Joyce told Ricky Lo that she met Paul last December 2005. They started going out by April or May 2006, and then they got engaged.

"Paul, I understand that both your parents are Filipino?" Ricky asked.

"Yes," Paul answered. "I was born in the Philippines, in Quezon City."

"How old were you when you migrated to the U.S.?"

"I was just a baby," Paul answered. "We left the Philippines when I was about two...three years old."

Switching the topic to Joyce, Ricky asked Paul, "What were the first things that attracted you to her?"

"The things I liked about her all these years were that she's down to earth," Paul said.

"So, what are your plans after the wedding?" Ricky asked

Joyce answered, "After two weeks, I'm going to fly back to the Philippines."

"Where do you plan to settle down?"

"We're going to settle down in California, but I still have a lot of things I want to take care of," Joyce answered.

Now that she's married, would Joyce leave behind her showbiz career in the Philippines?

"Of course not. I am just getting married. It's not going to change anything to me other than my legal status. The Philippines is my home and that's really where my heart is," said Joyce.
Read Next
Read More Stories About
Joyce Jimenez
Post a Comment
Featured
Latest Stories
Trending in Summit Media Network