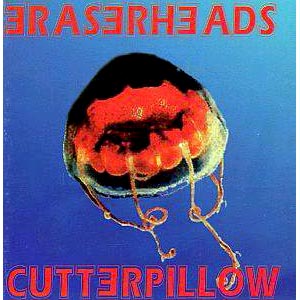 Truly a phenomenal music act, the Eraserheads tirelessly churned out hits by the dozen, from their arrival in 1993 up to the band's bitter demise in 2002. The band's third album, Cutterpillow, released in 1995 clearly affirmed the Eraserheads' reputation as OPM royalties. The eagerly awaited album achieved gold status even before its official launching brought by an unprecedented pre-selling promo campaign launched by BMG Pilipin

No one knew it at the time, but when the quartet of Ely Buendia, Marcus Adoro, Buddy Zabala and Raimund Marasigan—collectively known as the Eraserheads—emerged commercially in 1993, Original Pilipino Music (OPM) was on the threshold of a new and exciting era. The band churned out hit after hit after hit.

In 2002, however, the most successful and influential local rock band heaved its last breath after frontman and chief songwriter Ely Buendia left the group due to personal and creative differences with his bandmates.

Six years later, on August 30, 2008, the Eraserheads momentarily set aside their differences to re-group for one night only as a gift to the thousands of fans who tirelessly clamored for the band to get back together.

As a tribute of our own, PEP (Philippine Entertainment Portal) listed ten of the Eraserheads most recognizable singles from 1993 to 1995. While it is important to take note of the band's stellar number of well-loved songs during this period, these are only some of the songs that left an indelible mark in the hearts of the majority, even those non-hardcore fans.

PARE KO. Even before "Pare Ko" became the national tambay anthem, the song had already achieved a considerable cult following among University of the Philippines students who frequent campus gigs. Even when they were just starting out, "Pare Ko" had always been the rabbit on the Eraserheads hat—a secret ammunition made to cover up the quartet's sloppy technical chops and amateurish live set during their startup years.

The song's magic continued to carry the band when they were admitted at the now defunct and legendary club joint, Club Dredd. According to local rock scene veteran Jing Garcia, "Pare Ko" instantly caught the attention of club patrons the moment they heard the song.

"The song had turned into an all-time club hit, endlessly requested until the band had enough of the classic tambay song and stopped playing it altogether," wrote Jing in Tikman ang Langit: An Anthology on the Eraserheads.

"Pare Ko" was included in the Eraserheads' crudely recorded demo Pop-U! and later on in the band's debut album, Ultraelectromagneticpop! The song's straightforward and unpretentious lyric about spurned love complemented by a simple melody was simply too much for the mainstream listeners to resist.

Now hailed as an OPM classic, "Pare Ko" is being considered as the song that best defined how unique and fresh the Eraserheads was when they first appeared commercially way back in 1993.

WITH A SMILE. Eraserheads chief songwriter Ely Buendia's love for The Beatles evidently shone through in this optimistic love ballad. The song's innocence pushed the right buttons among the young listeners who were either riding on the afterglow of a puppy love or those mature enough to know the difference.

During the time, the Eraserheads were not known to write straightforward love songs and the band's second album, Circus, found the band sharpening their cutting wit and trademark irreverence even more making "With A Smile" a revelation in terms of Buendia's sensitivity and versatility as a songwriter.

"Toyang" is a reminder of how wonderful plain love is sans the trappings of material objects. But it also represents how blinding love can be particularly to people too young to realize how hard and trying life can be in the long run.

Though the song is credited to both Ely Buendia and Marcus Adoro, insider revealed that "Toyang" was largely inspired by Buendia's college sweetheart, Vicky, with whom he reportedly sired a daughter.

The band rarely played this song as they matured in the scene and if they do, the quartet usually include "Toyang" as part only of a medley along with some old materials.

Obviously, the song doesn't measure up in terms of sophistication as compared to the songs the band continuously churned out after their debut album. But regardless of lyrical poetry, "Toyang"—with its simplicity and amusing melody—found its way to the hearts of the local listeners all the way to the pages of a videoke songbook.

ALAPAAP. Perhaps the most controversial song on the entire Eraserheads catalog. "Alapaap" was labeled by some conservative group as a "drug" ditty due to its use of suggestive lyrics. The song's intro, with Ely's voice seemingly floating in a trance while caught in a spacey atmosphere renders the beginning a psychedelic feel.

Its chorus, "Masdan mong aking mata / ‘di mo ba nakikita / ako ngayo'y lumilipad at nasa langit na..." shook even the senate halls prompting then Senator Tito Sotto to issue an invitation to the band to appear before lawmakers to explain the song's message.

In a collective statement, the Eraserheads defended the song, arguing that it is a call for freedom and not an invitation for narcotic refreshment. The interpretation depends solely to the listeners they echoed.

It is however important to take note that early reviews of the album, Circus, singled out "Alapaap" as a song that is courting controversy. One article published a week before the release of the record even expressed regret over the thought that the song may not found its way to the airwaves despite its strong potential.

Still, and despite the issue, "Alapaap" was heard all over the country as radio stations played the song in heavy rotation signaling another hit for the band. For a song that doesn't tackle love, "Alapaap" is exceptionally melodic and irresistibly catchy making the Eraserheads "ode to freedom" a euphoric masterpiece.

MAGASIN. Legend has it that "Magasin" was inspired by Ely Buendia's cousin. According to the story, Ely wrote the song based on the experience of a relative after seeing a photo of an ex-girlfriend—rumored to be ‘80s starlet Shirley Tesoro—splashed on the pages of a sexy magazine.

"Magasin" is both hilarious and strangely touching—never mind if the protagonist wished in the end to see his former lover in all her naked glory through the magazine's centerfold pages for its next issue.

"Meron bang nasasagasaan sa eskinita?" he asked, referring of course to the song's tragic ending where the heroine was ran over by a car while walking in a dark and cramped alley.

Given Ely's bleak feelings that time for the Eraserheads legacy, it is of course easy to understand his public misgivings when it comes to anything about his former band. But regardless of the enigmatic singer-songwriter's comment, there is no denying the impact and significance of "Ang Huling El Bimbo" not just to the group but also to OPM as a whole.

Aside from its theme of undying-unrequited love worthy of a Shakespeare obra, "Ang Huling El Bimbo" found the Eraserheads mightily brandishing their ability to write a pop song served in theatrical narrative style. Though it is no "Bohemian Rhapsody," the song in a way offered something fresh in terms of structure and style—a tall order for any local rock act to follow even today.

"Ang Huling El Bimbo" was touted at the time as a highly ambitious project. Clocking in at 7:29, the song is considered too long for radio airplay standards. But like The Beatles in 1968 when they issued their epic single, "Hey, Jude" the Eraserheads were simply so huge in 1995 that they could just get away with almost everything.

OVERDRIVE. A simple take on an adolescent's desire to own that dream car, mainly perhaps to show off rather than for convenience sake. Ely Buendia presented all the possible joyous scenarios like driving out of town with preferably a girlfriend in tow complete with siopao, tapsilog, burger and fries. As a bonus, the witty singer-songwriter also mentioned the thought of tagging along a dog but on one condition: "Basta't meron siyang baong sariling buto."

A light song that some critics labeled as one of the few mediocre materials found in the entire Eraserheads canon. Yet, "Overdrive" is a hit single when it was released in 1995 and despite its rather shallow subject and childish lyrics; the song's simplicity and whimsical vibe were grasped by the young listeners.

Curiously, the Eraserheads—known for their abundant inside jokes—once said that "Overdrive" was about sex and not about cars and driving.

LIGAYA. It is easy to understand why BMG Pilipinas would choose "Ligaya" as the Eraserheads debut single. Catchy, hook-filled and unabashedly down-to-earth, "Ligaya" perfectly captured all the ins and outs of campus courtship.

The song likewise provided the listeners their first peek into the band's Beatlesque melodies. Written during the period when they were just merely a bunch of scruffy UP college students, "Ligaya" possessed all the hallmarks of innocence and carefree days. When a young Ely Buendia plaintively sang, "Gagawin ko ang lahat pati ang thesis mo," it all reminds us of flying butterflies by the mere sight of a crush.

HUWAG MO NANG ITANONG. A song doesn't have to be straightforward at all times to convey its message. Even up to now, nobody exactly knows what chief songwriter Ely Buendia was directly saying every time he's singing "Huwag Mo Nang Itanong."

Green Day vocalist Billy Joe Armstrong once said that bands or artists tend to write poignant materials as they go along and become successful. When the Eraserheads released their third album, Cutterpillow, in 1995 the band was a certified hit making machine and a force to reckon with in the industry. As adults finding themselves as celebrity figures, the pressure both on their professional and personal lives was also starting to be felt.

Compared to the previous two albums, the songs in Cutterpillow found the band writing about complex issues away from the usual themes of college life and young love. "Huwag Mo Nang Itanong" also exhibited Ely's vague style of songwriting where the narrative doesn't follow a consistent thought yet managed to maintain the general emotion as envisioned by its author.

MINSAN. A nostalgic ditty fitting enough to be a graduation anthem. "Minsan" might as well be the Eraserheads answer to the APO Hiking Society's "Awit ng Barkada" with its theme of friendship and the inevitable reality of having to part ways.

The story was written by Ely from his personal viewpoint, mentioning Kalayaan—the dormitory where he stayed while studying at the University of the Philippines—and narrating the common mundane activities of dorm mates, like drinking sessions or just sharing secrets and dreams.

Listening to the song and thinking how big the Eraserheads have become, one can't help but realize that before all the accolades, Ely, Buddy, Raimund and Marcus were just normal college buddies uncertain too about their future.

For its next installment, PEP will feature the Eraserheads' other notable songs. Some were never released as singles yet these left an indelible impression on ordinary listeners and artists alike.