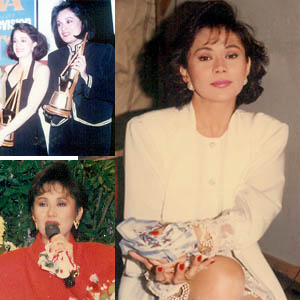 One of the trademarks of the Star for All Seasons Vilma Santos is her handy hanky that always goes with whatever she's wearing. One story says she got the habit from friend Coney Reyes (upper left inset, wearing a jacket). But what is the real story behind the now Batangas Governor's hanky habit? When did she start carrying what mischievous rumormongers call Vilma's "mysterious hanky"?

In 1963, a nine-year-old girl from Trozo, Manila, went to Sampaguita Studios for a movie assignment that her cameraman uncle got her. She was supposed to star in a movie with then big-name actresses Gloria Romero and Rita Gomez. But along the way to the set, she and her mother stopped by an ongoing audition for kid actresses for a new movie. Star-maker and Sampaguita Studios owner Dr. Jose "Doc" Perez saw her and asked her to join the audition. Hesitant at first because she had already committed herself to another movie, she later gave in to Doc Perez's request. He was the movie company's owner, after all.

When her turn to act with veteran character actress Bella Flores came, everyone was impressed, including Doc Perez himself. She did not only pass the audition, she also got the lead role.

Fittingly dubbed as "The Star for All Seasons," she has maintained her luster despite the years and changes in show business; despite the challenges brought about by the coming of younger stars; despite the intrigues, challenges and personal problems that threatened to rid her of her throne as a queen in Philippine movies.

Vilma Santos maintained her status as a bankable movie star and as a critically-acclaimed actress over the four decades (and still counting) that she has been in show business. Vilma won not only numerous top acting awards, but also the love and loyalty of movie fans who call themselves "Vilmanians."

This five-foot-flat Scorpio-born also gave a new meaning to the term "versatility." Adding to her roster of abilities and talents—acting, singing, dancing, producing and hosting—she entered politics and governed first, Lipa City, and eventually the whole province of Batangas, famous for its machismo or "pagiging barako."

URBAN LEGEND: THE "MYSTERIOUS HANKY." But a legendary star like her is not without naughty rumors, tall tales, or urban legends. Vilma had her share of stories bordering on exaggeration and fallacy.

One such story is the urban legend of Vilma Santos's "mysterious hanky."

One tale has it that she always carries a hanky to hide the bulging veins on her left hand. Mischievous rumormongers have another version that says Vilma has very sweaty hands, that's why she always has this handy hanky—to wipe her hands first before shaking a person's hand or touching another person.

THE HANKY EXPLAINED. PEP (Philippine Entertainment Portal) sought the help of no other than Jojo Lim, the president of Vilma Santos Solid International, Inc. (VSSI, Inc.), to shed light on this urban legend.

Jojo Lim a Vilmanian since 1978, gave PEP what he knows about the "mysterious hanky" of Ate Vi.

Jojo continued that Vilma later gave up the "lampin" for soft, signature hankies that matched the color of her clothes in the ‘80s. Clothes that were made by popular designers Danilo Franco, Chiqui Hollman, Steve de Leon, Danny Acuna and Rajo Laurel.

VSSI auditor Al Valencia, a Vilmanian who fell in love with the Star for All Seasons the moment he first watched her in Lipad Darna Lipad, gave PEP another story about the hanky.

But the most legit explanation to the "hanky mystery" comes directly from Governor Vilma Santos-Recto herself, when PEP caught up with her in a presscon sponsored by Bear Brand, the milk brand she endorses.

PEP asked her for the story behind her now trademark hanky-on-hand.

Gov. Vi said she started to always carry a hanky on her left hand during her Vilma! (Vilma on Seven or V.O.S.) days. She now needs to carry it more often than before, now that she's always on the move, visiting barangays in Batangas in the sun's heat and the blowing dust to see what the Batangueños need and what she can do to meet their needs.

Next week, PEP will tell the real story behind another Vilma Santos urban legend.