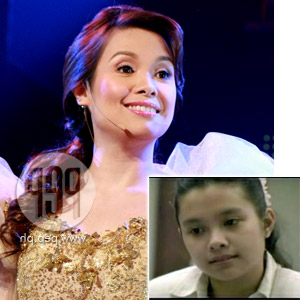 Before all the recognition and accolades, Lea Salonga was a 17-year-old dreamer who hesitantly took her chances by showing up at the audition of the highly anticipated London musical Miss Saigon. Lea impressed the strict, meticulous Miss Saigon production team and bagged the coveted role of Kim. From then on, she became an international star in the world of theater musicals.

With less than a year remaining to find the actress for the role of Kim—the lead character of the tragic Claude-Michel Schönberg and Alain Boublil opera—the team behind the West End musical Miss Saigon, led by Sir Cameron Mackintosh, were all feeling desperate.

The production team held a string of auditions in the hope of discovering a competent Asian actress-singer fit for the part of a Vietnamese bar girl who falls in love with an American soldier in the midst of the Vietnam War.

Their London quest to find Kim failed and the producers found themselves starting all over from scratch.

Setting their sights outside the United Kingdom, Schönberg proposed a visit to the Philippines to hold an audition. The highly esteemed composer was confident that they would not return home empty handed. He knew the abundance of singing talents in the Philippines.

"Singing was in their blood," a bold Schönberg reportedly quipped to the production team to emphasize his point.

FINDING THE ONE. On the early morning of November 13, 1988, Filipinos leafing through their newspapers were intrigued to find a logo that looked like a helicopter hovering at sunset, with the vague image of a woman lurking at the side. It was an advertisement announcing an audition for the lead female character of Miss Saigon.

One of those who learned of the audition was 17-year-old Lea Salonga. A child star who was a fixture both on television and the stage, Lea was already a well-known personality even before Schönberg had thought of the Philippines as a talent goldmine.

Like most young celebrities at the time, Lea was part of the teen variety show That's Entertainment and even appeared in the syrupy wholesome movies, Tropang Bulilit; Like Father, Like Son; Ninja Kids, Captain Barbell, and Pik Pak Boom. She was also identified as the "lucky girl" who sang and performed alongside Menudo—the popular Latino boy band who gained international success in the early ‘80s.

Lea was also very active in the theater and it was quite obvious early on that the young singer-actress's heart belonged to the stage.

ENTER LEA SALONGA. When news came out that a Miss Saigon try-out was about to take place, Lea was coaxed by her friends from the theater to audition. Landing the lead role would be amazing, of course, but securing even a bit role wouldn't be that bad, what with the huge scale of the project, they reportedly told the hesitant young thespian.

Setting her fears aside, Lea heeded the call and went on to face the Miss Saigon jury composed of Cameron Mackintosh, Claude-Michel Schönberg, Nicholas Hytner and Alain Boublil. A clip of the audition (which can be found on YouTube) showed a young Lea—sporting a pony-tail and a long-sleeved polo—bursting into the room clutching a brown envelope containing a copy of what appeared to be a lyric sheet of the award-winning musical Les Miserables.

"Before we start I would want to ask a favor," she told Schönberg. "Can you autograph this for me?" Lea handed the lyric sheet to the composer. Schönberg together also with Boublil wrote the music for the stage adaptation of the famous Victor Hugo novel back in 1980 in Paris.

After the brief autograph session, the ever professional Schönberg quickly proceeded to the piano to work and teach the young aspirant the material. Picking the song "Sun and Moon" the French composer simultaneously sang and played the first few lines to guide Lea—who looked a bit nervous and attentive, alternately darting her eyes from the transcript of the song lyrics placed on the piano to Schönberg.

After a few false starts, Lea found her rhythm and confidence. Lea's distinct, clear voice was already evident as she melodically enunciated the words in harmony with the music. The YouTube clip showed the three panelists—Mackintosh, Hytner and Boublil—listening intently. Gradually they shed off their stern demeanor, as if Lea's voice completely melted their impenetrable armor.

In the end of Lea's remarkable rendition, the three could only gush, "Beautiful... fantastic!"

Later on, the jurors said they were certain that they had finally found Kim the moment they heard Lea sing the first note of "Sun and Moon."

Lea learned the good news that she had bagged the coveted role of Kim at "around 10 in the morning of November 18," she recalled.

All of the names mentioned were included in the cast with Monique Wilson serving as Lea's alternate, aside from playing the role of a bar girl named Mimi.

MISS SAIGON OPENS ON STAGE. Completing the cast were British actors Jonathan Pryce, Simon Bowman, Claire Moore, Keith Burns, and Peter Polycarpou. In London, the complete Miss Saigon cast together with the ensemble converged at the Sadler's Wells Theater on July 3, 1989 for the first day of what would turn out to be a grueling two-month rehearsal.

On September 20, 1989, Miss Saigon premiered at the Theatre Royal Drury Lane in London. The late Princess Diana headed the 2,250 people who came to watch the theater spectacle.

As it turned out, Miss Saigon lived up to all the hype that preceded its grand opening. Earning the fascination of the audience were the effects used, e.g. life-size replica of Vietnamese revolutionary leader Ho Chi Minh and the helicopter hovering above the stage.

But most importantly, the acting, most notably of Lea Salonga, made Miss Saigon a massive stage hit. Lea Salonga became the "new toast of London."

BROADWAY CALLS. Following its London success, Miss Saigon moved to a grander stage in New York: Broadway. The transfer was not easy as Jonathan Pryce and Lea found themselves being questioned by the American Equity Association (AEA)—an association founded to defend and protect the interests of American actors. Foreign actors—in this case, Lea and Jonathan—must first gain the approval and permission of the body.

Mackintosh, not willing to bend and compromise, fought hard for both Lea and Jonathan. Despite strong ticket sales, the strong-willed theater producer went all-out and even canceled the show unless the AEA reversed its ruling and allow the original actors to reprise their respective roles on U.S. soil.

The argument against Lea was her foreign nationality and AEA wanted one of its members to be given the opportunity to play the role of Kim. Problem was, and as Mackintosh explained, he wasn't able to find someone in America and Canada with the same caliber as Lea to fill in the role.

On January 7, 1991, arbiter Daniel Collins finally allowed the questioned actors to star in the Broadway version of the musical. According to the ruling, the court granted Lea permission because she was "an actor providing unique services."

Lea Salonga's performance as Kim earned her several awards and recognitions from the Outer Critics, Drama Desk, and Theatre World. Recognized for her Outstanding Performance as an Actress in a Musical, Lea received the celebrated Antoinette Perry plum.

A few months after receiving the honor, Lea's greatest achievement finally came when she was bestowed the Best Actress in a Musical by the Tony Awards in front of a global audience.

The huge success of her Miss Saigon performance paved the way for other world-class projects. Lea lent her singing voice to Princess Jasmine in the Disney animated film Aladdin. She portrayed the tragic character of Eponine in the Broadway rendition of Les Miserables in 1995. And in 1998 and 2004, Lea once again lent her beautiful voice to Disney's animation, Mulan.