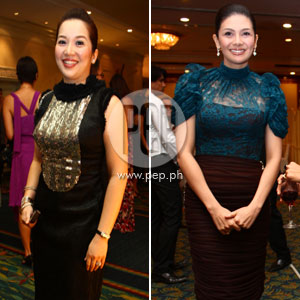 According to onlookers, Kris Aquino (left) told Charlene Gonzalez (right), "Pa-star ka," when the latter wore blue, instead of black, during the Randy Ortiz fashion show featuring his holiday collections.

TV show host-actress Kris Aquino is known for being tactless in making remarks about people. In fact, she used to land on the headlines for her unsolicited comments. Last week, at a show of fashion designer Randy Ortiz, Kris once again stole the scene.

In Dolly Anne Carvajal's entertainment column yesterday, September 9, she reported, "At the gala show of Randy Ortiz, Kris snapped at Charlene [Gonzalez-Muhlach], ‘Pa-star ka!' just because the color of Charl's gown was different from the set motif."

Apparently, the motif for the event was black and white. Charlene wore a blue and dark brown outfit.

However, in an interview with TV Patrol World's Mario Dumaual aired earlier tonight, September 10, Randy Ortiz explained that there was really no color motif set for the event. He also had no intention to make Charlene different from the other celebrities. He added that the TV show host had fitted her outfit even before she went to an OFW event in Dubai. The fashion designer also believed that Kris was just joking Charlene.

This was also the explanation of Kris in a text message sent to TV Patrol World. She said that her mistake was that she cracked a joke at someone who is not close to her. Also in the same message, the Kapamilya, Deal or No Deal host recalled the issue between her and Charlene about the cancelation of the latter's weekend program.

Kris continued, "Obviously, she doesn't like me and my mistake was I gave her another reason to dislike me."

At the end of the message, Kris wrote, "Iniintindi ko na lang. I joked with the wrong person, so I apologized right away."

On the other hand, Charlene chose to keep mum about the issue. Her mother, Elvie Gonzales, hopes that this would serve as a lesson to everyone—to carefully choose the person that's the butt of a joke.