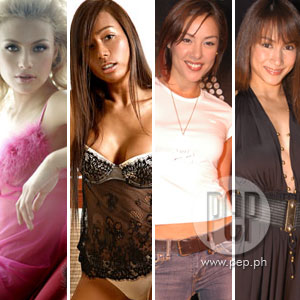 San Miguel Beer have through the years, featured countless of image models in their TV commercial ads. Of course, the easier parts to remember were the beautiful ladies featured on those ads and PEP, through its Top List, have listed some of those women who captured the eye of viewers and eventually became closely associated with the brand.


San Miguel Pale Pilsen steadily climbed the market of Filipino beer drinkers since its launching in 1890. A century later, it has become one of the world's top 20 beer brands.

The famous product is smooth, cool, sexy, and deliciously fulfilling—so goes a typical San Miguel commercial. And you better believe it, coming as it does from equally famous personalities who endorse the beer during "happy hours."

Some showbiz celebrities today were discovered by acting as San Miguel Beer ladies. Others lent their star power to endorsements. From beauty queens like Marilen Espino and Jeanette Fernandez to showbiz personalities like Ina Raymundo, Nanette Medved, and Kris Aquino, San Miguel Beer's TV ads mixed and matched these ladies with the best theme for them. And so, remembering their faces meant remembering the beer brand as well.

Rachelle Lobangco. A crowded beach finds comedian Bert Marcelo, the Apo Hiking Society, and a fiesta-loving crowd going gaga over Rachelle Lobangco. And, of course, San Miguel Beer. The song "Siboom," sung by APO, became so popular that it was synonymous with Rachelle's name, thus introducing her as Rachelle "Siboom" Lobangco.

Rachelle debuted in showbiz afterwards via her first film Dugo ng Pusakal (1988). She became known in showbiz circles, and eventually landed more films like Kokak (1989), and a string of sexy films. Recently, Rachelle appeared in GMA-7's Etheria as As'nan. Rachelle now concentrates on modeling and fire dancing, and was recently featured as one of FHM magazine's cover girls.

Rowena Moran and Angela Luz. "Sabay Tayo" was SMB's commercial that teased the sensual side of the audience with a collage of different clips featuring two of the hottest stars of the time: Rowena Moran (Lovi Poe's mom) and Angela Luz.

The Pamboy Lorenzo song "Sabay Tayo," accompanied the commercial's visuals perfectly as it evoked the romantically sensual air of a young fellow yearning for his love-with only San Miguel Beer for company.

Angela Luz appeared in another SMB ad called "Bilmoko" (1988) opposite Boboy Garovillo of the APO. The ad depicted Boboy fantasizing about being rich, and his dream showed him with the beautiful Angela asking him to buy this and that-from clothes to jewelry, hence her label "Bilmoko girl." The song in the ad, "Turistang Bilmoko", was an original from Fred Panopio. By the way, "Bilmoko" raised the hackles of feminists who said it painted a negative image of women as mere gold-diggers.

Some people say that action star Fernando Poe Jr. noticed Rowena in this commercial, which eventually led to a relationship. Angela, on the other hand, met and became the girlfriend of Vic Sotto.

Ina Raymundo (with Cutie del Mar). Who can ever forget the rock-themed commercial of San Mig's Sabado Nights, with Paolo Abrera gearing up for a Saturday night date with Cutie del Mar? It starts off with a good-looking Paolo gearing up for a date and hopping into his sports car to fetch his girlfriend (Cutie). Even though his girlfriend starts hanging out with another guy, Paolo, unbothered and fondling his beer, says, "Ok, lang!"

And then, sexy Ina Raymundo makes her entrance at the bar, sits beside Paolo, and of course, he gets lucky to get the hottest girl around. Ina Raymundo perfectly fits that commercial with her rocker-chic looks and curvaceous bod.

Ina's appearance paved the way for more projects, including a movie from the commercial aptly called Sabado Nights and starring Ina herself. After the commercial, Ina's career skyrocketed and she became one of the 90's sex icons via the movies Burlesk Queen Ngayon (1999) and Madame X (2000).

Cindy Kurleto and Cristina Garcia. Ah, the Philippines takes pride in its beautiful women, and that is exactly what SMB rode on in its 2002 TV ad. This commercial brings viewers into the perspective of probably two of the luckiest guys on the planet who take in the wonderful view-that is, the Filipina- while sipping beer.

Aptly titled "Binibini," the commercial gave viewers the impression that, aside from the Filipina, there's no other beer in the world like SMB.

Among the beautiful women in the commercial are Cindy Kurleto as the pedestrian, and Cristina Garcia as the rollerblading gal. Though both women were already known at the time this commercial was released, fact is, the short TV ad gave Cindy and Cristina some mileage for future TV and print appearances.

Kris Aquino. Two years ago, an SMB commercial, "Driver," featured Derek Ramsay in a red Ferrari with an unknown woman at the wheel. The ad clearly teased the viewers' attention about the assets of this mysterious woman. As the commercial progressed, the woman turned out to be no other than Kris Aquino, SMB's latest female celebrity endorser.

Kris, who looked nothing less than sexy in the commercial, gave TV viewers a close- up on how hot she can be, even without the cool Ferarri.

SMB, which shifted to choosing well-known celebrities over fresh faces, made the brand as popular as ever when Kris appeared in one more commercial, "Painom," opposite Manny Pacquiao.

"Painom," which aired the same year as Driver, was about Manny Pacquiao offering to buy a few drinks for some friends and the word spread like wildfire. In the end, Kris confronts Manny with, "Magpapainom ka daw?" Manny asks back, "Sino may sabi?" Kris replies "Sila!" nodding towards a huge crowd of merrymakers.

From the colorful culture of the Pinoys to the simplicity and beauty of Filipinas to the fun and lasting friendships, it's truly "iba ang may pinagsamahan" with San Miguel Beer.

And you, who's your most favorite Beer lady?