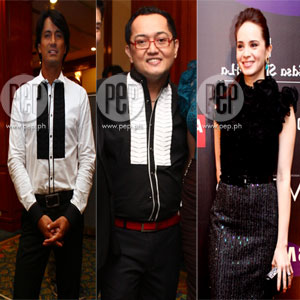 Showbiz's best-dressed stars did not dare miss Samsung Metrowear—which marked the first gala of Randy Ortiz, one of the country's fashion innovator—held at the Isla Ballroom of Shangri-La Edsa last September 4.

The concept of the show was inspired by the cinema and its icons. Dubbed as "Aspirer," the three remarkable eras in fashion—'50s, '60s, 70s—were fused that night. And once again, the waisted fishtails, voluminous skirts, peplum jackets, and corded fabrics were highlighted on the catwalk.

Celebrity couple Raymart Santiago and Claudine Barretto, whose wedding gown in 2006 was made by Randy, were spotted in the front row during the fashion show. Agot Isidro also came with husband Manu Sandejas, and Joanne Quintas with husband Domini Primero.

SIDELIGHTS. By now, we must have already heard the much-talked about fall of Bea.

The I Love Betty La Fea star, as she was doing the finale walk, slipped big time on stage. But instead of feeling upset, Bea just laughed off her blooper. After the show, she said in an interview: "Kasama ito sa aking list of 'My Most Embarassing Moments.' We're mature enough to not cry and just laugh about it."

But it wasn't Bea's inept experience in modeling which was cited as the cause of her fall: It was the slippery runway. The Kapamilya actress wasn't the only one who slipped that night. Even top model Suyen Chi also fell, but made the most out of it—she posed regally.

The second side story is, of course, the "pa-star ka" comment of Kris about the gown of Charlene.

The former got the idea that Randy's ladies would all wear black that night, so she was quite taken aback when Charlene arrived wearing a laced indigo blouse and brown ruched skirt.

She reportedly uttered the "pa-star ka" comment four times. And after the event, the wife of Aga Muhlach confronted Mrs. James Yap saying, "Kris, do you have a problem with my dress?"

In a text message sent to Mario Dumaual of TV Patrol World, the game show host said: "Obviously, she doesn't like me and my mistake was I gave her another reason to dislike me."

She ended her message with: "Iniintindi ko na lang. I joked with the wrong person, so I apologized right away."

Indeed, star-studded events, even if set outside of the showbiz arena, will always have interesting stories to tell.

To view some of the event photos, click these PHOTOS taken Yayay de Castro of PEP's sister website, www.stylebible.ph .