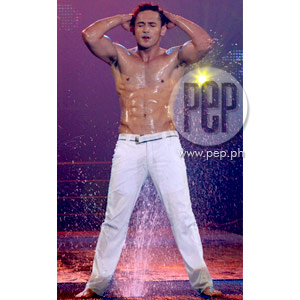 Paolo Contis played around the mini-fountain installed on the ramp of A. Venue Events Hall in Makati City. The GMA-7 star was one of the celebrity centerfolds of the 2008 Cosmo Bachelor Bash held last night, September 11.

The party theme was "Wet and Wild!"

Guests of the 2008 Cosmo Bachelor Bash were equipped with plastic water guns that came in handy during the event last night, September 11. The A. Venue Events Hall in Makati City was packed with fun and fearless females who were all excited to see this year's Cosmo bachelors and celebrity centerfolds handpicked by the staff of Cosmopolitan Philippines magazine.

Around 9:45 p.m., Eri Neeman and Jada Pangan of Wave 89.1 got the ball rolling for sexy games. Afterwards, the spotlight focused on Eric Tai, a model-actor-host who wowed the mostly female crowd with his flexibility and breakdancing moves. Steamy guys joined him on stage as they all walked down the T-shaped ramp.

Paolo Contis, the last centerfold to model last night, strutted down the ramp wearing a black T-shirt. Suddenly he raised his shirt and confidently showed off his well-defined abs and biceps. The crowd showed their appreciation by spraying him with their water guns. The GMA-7 star lived up to the wet-and-wild theme by kneeling down and playing in the mini-fountain installed on the ramp. Girls went loco, seeing the topless Paolo with water streaming down his torso and his impeccable white pants. The host of GMA-7's World Records appeared uninhibited even though his girlfriend Isabel Oli was in the audience.

Paolo on the catwalk certainly took Isabel's advice to heart.

Another celebrity centerfold who tantalized the crowd was Bruce Quebral, a former housemate of ABS-CBN's Pinoy Big Brother Season 2. The moreno actor teased the crowd by lowering the front part of his pants, just enough to get everyone's imagination racing. Even in his Cosmo pictorial, Bruce posed provocatively by using a towel to cover his private parts.

Ron Morales, one of the finalists of the Be Bench/The Model Search, came out wearing a white sando but he took it off and triumphantly threw his hands in the air.

International singer Billy Crawford—wearing a bull cap, a white polo, white pants, and a scarf around his neck—performed his hit "Bright Lights." After his song-and-dance number, he returned on stage wearing a white sleeveless vest that showed off all his arm tattoos.

One of the most applauded performers that night was Akihiro Sato, a Japanese-Brazilian model with a mix of Italian blood. His fans even wore "I Love Akihiro" pins proudly to signify their support for the model.

Cager Macky Escalona carried a basketball as he went down the ramp, while international model Rocky Salumbides brought out his inner boxer by wearing gold-and-blue shorts.

Among those spotted at the venue were IC Mendoza, who took home a raincoat from one of the models; Maggie Wilson, who covered the event for her MTV show; Andrew Wolff and Juliana Palermo.

As confetti rained down on the topless hunks, everyone who attended the event went home satisfied that they survived the sizzling September heat wave.

Get a copy of the Cosmo Men supplement when you buy the September 2008 issue of Cosmopolitan magazine featuring Maja Salvador on the cover.


Click HERE to view photos of the 2008 Cosmo Bachelor Bash.