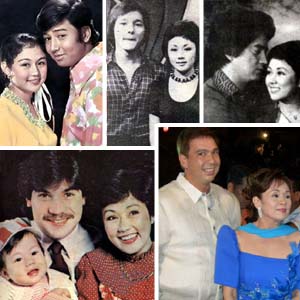 Early in her career, during her teen years, Vilma Santos proved that she could hold her own against a much popular competition. When critics doubted and belittled her abilities, she pushed herself to prove them wrong and gave out memorable performances.

By going beyond expectations, Vilma showed early signs that she would really make a name and have a long, durable career in show business.

And because of her persistence, determination, talent and of course, beauty, it was inevitable for Vilma to attract the attention and affection of almost every man in showbiz and in other fields of work.

There was a lot of talk about the men linked to Vilma. Some stories said the relationships were not real; these were just rumors that were spread to drum up publicity for her movie with whoever was her screen partner.

TEEN STAR. From being a child star, Vilma went through her teens without experiencing the usual problem of child stars entering their teens, particularly young girls—that is, lacking roles to play because of their "awkward no longer-a-girl, not-yet-a-woman" stage.

From ages 13 to 15, Vilma essayed roles in movies like the Hollywood film The Longest Hundred Miles (1967), the heavy drama Sino Ang May Karapatan (1968), and the Ferdinand-Imelda Marcos love story Pinagbuklod ng Langit (1969) where Vilma played the role of Imee Marcos.

By late 1969, movie producers had been tapping a Vilma Santos-Edgar Mortiz love team. Edgar was a Tawag ng Tanghalan winner. They started to be together in the movies, My Darling Eddie (1969) and The Jukebox King (1969).

THE VI & BOT ERA. In 1970, the love team of Vilma Santos and Edgar "Bobot" Mortiz was officially launched in the movie Young Love, together with the another popular love team during that time, Nora Aunor and Tirso Cruz III. The Vi and Bot love team went on to do 14 more movies in 1970—The Young Idols, Songs and Lovers, Sweethearts, Sixteen, Love Letters, Love is for the Two of Us, Mga Batang Bangketa, My Pledge of Love, Renee Rose, Baby Vi, Because You Are Mine, Edgar Loves Vilma, From the Bottom of My Heart, and I Love You Honey. All did well at the box-office.

Jojo mentioned singing sensation Eddie Peregrina (paired with Vi in Mardy and I Do Love You, both shown in 1970), showbiz royalty Jay Ilagan (Inspiration, Remembrance, Ang Konduktora all shown in ‘72, and Sister Stella L in '84), young actor Paolo Romero (Ikaw Lamang in 1971), and even her rival's partners, Tirso Cruz III (Dingdong, Give Me Your Love, and Nobody's Child all in '73) and Manny de Leon (Teenage Señorita in 1971).

Jay Ilagan and Paolo Romero were also reported to have gone beyond the screen partnership with Vilma and individually tried their luck to have Vi as their girlfriend.

But those who wanted Vilma to be their girl lost hope when Vilma gave her sweet "yes" to Edgar on April 7, 1971. They were not just reel lovers now, but real lovers as well.

Vi and Bot starred in more movies, until they broke up on April 28, 1974. With Vilma once again fair game, suitors lined up, hoping to be Vi's next man.

Jojo said that among those who were reported to have courted Vi were Jojit Paredes (with whom Vi starred in the 1974 movie Tok Tok Palatok. Joji was one-half of the popular ‘70s singing duo Two of Us,) and Chinese kung fu superstar Meng Fei (he starred with Vilma in the internationally released action movie Twin Fist for Justice in 1974).

Single again, a slew of suitors once again tried their luck with Vi.

BOBBY, BOBBY, BOBBY. But it was with handsome actor Romeo Vasquez that Vilma Santos had her most controversial relationship. Romeo was the former husband of Philippine movie queen Amalia Fuentes. He and Vilma first paired in the movie Nag-aapoy na Damdamin (1976). It was also during this year that they became a couple.

They made several movies together, all of which did well at the box-office. Vi and Bobby (Romeo's nickname) became the most-talked about reel and real love team at the time.

The relationship was always on the pages of showbiz magazines and tabloid entertainment section pages because of the intrigues and the personalities who got involved with them.

It was rumored that Vilma and Romeo had a sex video being sold around video shops.

It turned out that the betamax issue was just a malicious rumor out to destroy Vilma.

The rumor did not affect Vilma as she went doing box-office and critically-acclaimed movies. In fact, the rumor just made Vilma even more popular because she handled it well.

As for the relationship with Romeo—

RUMORED WITH THE KING. Fernando Poe Jr., the King of Philippine Movies, was not spared from being rumored with Vilma during the time their movies Batya't Palu-Palo (1974) and Bato sa Buhangin (1976) became successful.

(AMB) Junior was a popular Spanish singer who became famous in the Philippines via his hit songs "But If You Leave Me" and "Yakap." He starred with Vilma in Rock, Baby, Rock (1979) and in Good Morning, Sunshine (1980).

TWO MARRIAGES. In 1980, Vilma made a movie with a well-known model who returned from the States after his tour with the U.S. Air Force. The balikbayan tried modeling and later on, acting. Edu Manzano starred with Vilma in the movie Romansa. He also married her that same year in Las Vegas, Nevada. The following year, Luis Philippe Santos Manzano was born. Their marriage did not last. They divorced in 1985.

After her divorce, Vi met a young business economist at a disco house in Quezon City. Vilma thought the young man was too forward when he approached her and asked for a dance. Vilma told him to wait.

Young Ralph Recto was so smitten with Vilma that he did wait for her in Kingkong Disco, until almost 4 a.m. When he finally got her, he never let go.

So there you have it. Setting the record straight and giving you the facts: Vilma had only five real boyfriends (she married two of them). And the rest, suitors, rumors, showbiz gimmicks.

Next week: Why Vilma Santos truly deserves to be called "The Star for All Seasons."