Beloved team-ups of the big screen 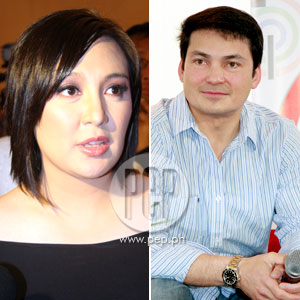 Sharon Cuneta and Gabby Concepcion made one of the most well-loved tandems in showbiz history. Pinoys simply got hooked on their reel-and-real love story.

Give avid fans their favorite team-up and you have a sure-fire box-office hit. Where does the "hit" factor come from? The couple's onscreen chemistry.

Several were onscreen partnerships that tried an off-screen love connection. Others are team-ups that fans, if they had their way, would like to see ending up for real.

But whether the romance progressed from reel to real, they've made it to PEP's (Philippine Entertainment Portal) list of beloved and wistfully treasured movie love teams.

Claudine Barretto & Rico Yan. Claudine Barretto was in the bloom of womanhood when Rico Yan entered show business. Rico first captured the hearts of TV viewers via a commercial in which he flashed his bedimpled smile. Claudine was one of showbiz's most in-demand young stars.

Their first team-up was in Radio Romance (1996). Both fair and beautiful, their team-up incited "kilig," resulting in a movie project: the romantic flick F.L.A.M.E.S. (1997).

In 1998, already dating in real life, the two starred in the hit, Dahil Mahal na Mahal Kita. But it wasn't until they did Got 2 Believe (February 2002) that Rico and Claudine garnered fans who avidly rooted for their partnership.

Their love story ended tragically, only a month after the success of Got 2 Believe. Rico Yan, 27, died March 2002, of acute pancreatitis at the Dos Palmas Resort in Palawan.

Jericho Rosales & Kristine Hermosa. For almost three years, the Echo-Tintin tandem was tagged as the "most popular" by Pinoys residing here and abroad.

Their reel love story began on the set of Pangako Sa 'Yo, and eventually, it became real. The viewers rejoiced.

The two went on to topbill the movies Forevermore (2002) and Ngayong Nandito Ka (2003). They only had two, but the impact of their love team was intense. In fact, die-hard fans cried over the split of the Echo-Tintin love team three years ago.

ABS-CBN paired them off with other stars, but the reception of the viewers was lukewarm. People just got used to seeing Echo and Kristine together. Eventually, their popularity waned.

This year, both Echo and Kristine are single again. There have been talks about reuniting their love team, and the Echo-Tintin fanatics are surely willing to give them a second chance.

Piolo Pascual & Judy Ann Santos. Some compare their love team to the old Guy-and-Pip tandem, as a new version—Judy Ann Santos capturing the hearts of the masses; Piolo Pascual, a mestizo balikbayan adored by colegialas and the sosyal crowd.

In 2000, when Judy Ann seemed ready to turn a new leaf after exhausting her team-up with erstwhile partner (on and off-screen) Wowee de Guzman, she was cast opposite newbie Piolo in the movie, Kahit Isang Saglit. That ‘one moment' caused such box-office triumph that Judy Ann and Piolo were soon promoted as the love team to beat.

Their joint movie projects became instant hits as well: Till There Was You (2003) and Don't Give Up On Us (2006). Compared to the other love teams, they had less movie projects, but to say the public response was strong would be an understatement.

As for a relationship beyond the set, a lot of footages showed the two being a little too sweet with each other, especially at the beginning of their team-up. But no confirmation about a relationship or affair happened. Eventually they drifted apart.

As Joey and Ese on the set of Gimik (1996), fans loved them to death. They were the comic relief in an otherwise over-dramatic script, and their bubbly approach made their partnership stand out. They were cute, they were funny, they were just plain adorable.

The team-up was cut short though when Jolina shifted networks in 2002. But Marvin followed his ‘partner' and they were reunited in GMA-7's series I Luv NY (2006).

Now the hosts of Dear Friend, they still have that adorable ‘it' factor that only their togetherness brings about.

Richard Gomez & Dawn Zulueta. Tall, dark and ruggedly handsome, Richard Gomez was the epitome of a leading man in the ‘90s. And then there was Dawn Zulueta, the beautiful goddess to Richard's "Adonis."

In 1991, Reyna Films cast the two in an adaptation of the Emily Brontë novel, Wuthering Heights, naming the movie Hihintayin Kita sa Langit. And there their story started.

Hihintayin Kita sa Langit was one of the most beautiful films ever produced locally, winning awards and critical acclaim both in and out of the country. Its heart-wrenching story created an impact that carried over to the real lives of the movie's main stars. Richard Gomez played Gabriel and Dawn Zulueta, the character Carmina.

Hihintayin's star-crossed lovers Gabriel and Carmina were given fresh life in the real love story of Richard and Dawn. Their fans were frantic to see their love succeed. And yes, for a time it did.

Richard and Dawn starred in other films: Iisa Pa Lamang and Akin ang Pangarap Mo (both in 1992) and Saan Ka Man Naroroon (1994). At the height of their popularity, they were also the top endorsers of a soft-drink brand promoting a healthier choice.

But hopes to see mini-me's of Richard and Dawn were dashed when they announced their breakup in the mid 90's. It was tough for their fans.

In the beginning, rumor had it that he was a-courting her and that she had a crush on him. Fast-forward to a few years since, and still a real love connection between them has yet to emerge. That doesn't stop their fans from hoping though.

Their effective team-up started in the TV series Kay Tagal Kang Hinintay (2002), which led to their movie My First Romance (2003).

On the other hand, young actor Gabby Concepcion, who came into fame via a toothpaste commercial, was already creating waves with his team-up with Snooky Serna in 1980.

Individually, Gabby and Sharon were charismatic. Together they created combustion. When Sharon, 15, was cast opposite Gabby, 17, in Dear Heart (1981), the public instantly fell in love with them. Dear Heart was their perfect route to popularity and they looked perfect for each other as well.

Sharon catapulted to fame in her role as the proverbial ‘poor little rich girl'. Gabby was the just the right foil for her character. That same year, Dear Heart was followed by P.S. I Love You, and then My Only Love (1982).

In 1984, Sharon and Gabby treated their fans to a production of a different kind. They got married in civil rites and in church on September 23, with then Pres. Ferdinand Marcos as one of their sponsors.

But the marriage did not last. Only their daughter KC Concepcion stands as proof of her parents' once sweet romance.

You may want to add Richard Gomez & Sharon Cuneta, Richard Gutierrez & Angel Locsin or Mark Herras & Jennylyn Mercado, etc.—the space below is all yours.