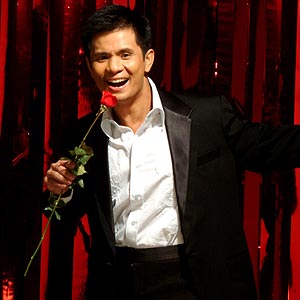 "It's a force that evokes so many emotions. It's so easy to draw from it when I'm writing songs," says composer-singer Ogie Alcasid of his inspiration for the songs he has written over the past 20 years, in an interview with Boy Abunda, which Ogie published in his personal website.

Ogie Alcasid is one of our most popular and prolific composers of Original Pilipino Music (OPM). Since the start of his career, he has written many songs not only for his own performances but also for other Filipino artists to interpret.

Ogie releases a music album practically every year since his debut as a songwriter in 1989. That makes 20 music albums in almost two decades. Five of these reached gold status: his debut album Ogie Alcasid, A Different Light (1995), Now and Then (2000), I Am a Singer (2004), and Ogie Alcasid: Greatest Hits (2005).

While local artists do covers most of the time, Ogie continues to create songs that capture the hearts of ever-romantic Pinoys.

How does an Ogie Alcasid work on his musical masterpieces?

Ogie tells Boy Abunda, "Songwriting for me is like a painting to a painter. I will start something and if I can't feel the flow, I will discard it and continue writing another day. If the creative juice gets going, I finish a song in one sitting."

Before his songs are able to touch the emotions of the listeners, he himself feels a song deeply. In his interview with YES! magazine, "Ogie Alcasid: 20 Years in the Biz, 20 Favorites" published this month, he reveals that he often sheds a tear after he finishes a song. "It affects me when the sentiments are so strong or if it reminds me of a certain emotion."

Although Ogie prefers to be known more as a composer, he was singing long before he joined showbiz. In high school he was a member of La Salle's all-male singing group called Kundirana. In his interview with YES! the singer-composer says, "Kundirana is where I guess I really started singing. It's where I honed my craft as an artist."

In celebration of his 20th anniversary, PEP (Philippine Entertainment Portal) ‘replays' some of Ogie Alcasid's most memorable romantic songs.

"Nandito Ako" Ogie Alcasid introduced himself to the public by singing this song, which was one the singles of his debut album Ogie Alcasid in 1989. "Nandito Ako" was hailed as the "Song of the Year" by local radio station Magic 99.9 and received a Monster Hit Award by RX 93.1 FM station.

This classic Ogie song is about a person who loves another who's already taken. One who's deeply in love but has no idea when his/her love would be reciprocated can surely relate to the song's second stanza:

"Nandito Ako" was used as the title of Ogie's first solo concert held in 1990 at the Meralco Theater.

"Sa Kanya" This song can be considered as the second hit song of Ogie Alcasid in the earlier part of his career. It has become the favorite of lovers who can't move on after a broken relationship and who still keep the flame burning.

After more than a decade, "Sa Kanya" was revived by acoustic duo MYMP in their second album Beyond Acoustic in 2005. Again, Ogie's song hit the airwaves as Juris Fernandez gave his own rendition of this OPM classic.

"Pangako" For the younger generation, "Pangako" was first popularized by Asia's Song Bird Regine Velasquez. This was used as the theme song for Regine's movie with Aga Muhlach Pangako...Ikaw Lang in 2001.

Music lovers and fans who've followed Ogie's career, however, would know that the songwriter already performed his own version in his second album, Pagkakataon (1990). Two versions were included in the album-his solo version and his duet with former onscreen partner Manilyn Reynes. Both versions became the Most Requested song after hitting the airwaves.

Incidentally, while searching for more information about this song, PEP chanced upon a music video in YouTube that has a melody similar to "Pangako." After follow-up searches, we found out that the song, titled "For Your Love" and sung by Korean singer Jang Hye Jin, was used as a soundtrack for the Koreanovela Glass Shoes.

"Mahal Kita, Walang Iba" After "Pangako," Ogie Alcasid made another hit song that was included in his third album A Step Ahead (1992).

It was also through "Mahal Kita, Walang Iba" that Ogie was hailed as the Best Male Performer by Awit Awards in 1993.

"Bakit Ngayon Ka Lang" Here's the anthem of people who are already attached or committed, but fall hard for someone else.

This is the song that gave Ogie his second Best Male Performer award from Awit Awards in 1994.

"Bakit Ngayon Ka Lang" is so popular that many singers have performed their own version, among them Sharon Cuneta, Pops Fernandez who sang it with RnB Prince Jay-R, and Sarah Geronimo in a duet with Erik Santos. The most popular duet version was performed by the acoustic band Freestyle, who rearranged the song to create a running exchange between two singers.

"Kung Mawawala Ka" A decade after he introduced himself to the public, Ogie's genius as a songwriter continued to flourish in local show business. In 2000, he released his first single "Kung Mawawala Ka" for his ninth album Now and Then.

This Song of the Year for 2000 was so popular that it was used as the theme song for the teledrama with the same title, Kung Mawawala Ka, starring then onscreen partners Cogie Domingo and Sunshine Cruz. Ogie performed a duet with young singer Karylle for this soap opera.

For those who don't remember the song, here's its chorus: "Kung mawawala ka

Other awards that this song collected were Best Ballad Recording (2000) from Awit Awards and Best Male Music Video in the MTV Philippine Video Music Awards (2000).

"Hanggang Ngayon" This song was first performed by Ogie but Regine Velasquez's version became more popular. It's also an addition to Ogie's "theme song" collection; it was used as the theme for Regine's movie with Richard Gomez, Ikaw Lamang...Hanggang Ngayon (2002).

The latter part of this song clearly described the situation of Regine, who plays Katherine in the movie. She was hesitant in loving Ryan (Richard) because of her fear that he might just leave her after giving her all.

Ogie also lends his talent to fellow music artists. In fact, some of our singers request him to write a song for them.

"Kailangan Kita" Ogie says that "Kailangan Kita is one of his favorite compositions. In his interview with talk-show host Boy Abunda, he describes the song as, "sweet and loving. A very personal song that is close to my heart."

This was first performed by Mr. Pure Energy Gary Valenciano for the movie Kailangan Kita (2002). Mushy Pinoys enjoyed this song after watching Aga Muhlach and Claudine Barretto in the said movie.

But "Kailangan Kita." became even more popular when heartthrob Piolo Pascual released his own rendition. This was included in Piolo's fourth album called Platinum Hits.

The lyrics of "Kailangan Ko'y Ikaw" really fit this rich girl-poor guy story of Francine and Gimo. The singer celebrity Francine was willing to give up her career just to be with her beloved Gimo.

Through this comedy-romance movie, "Kailangan Ko'y Ikaw" was named the Movie Theme Song of the Year by Star Awards and FAMAS.

"Pangarap Ko Ang Ibigin Ka" Another of Ogie's hit theme songs for a movie and popularized by Regine Velasquez.

"Pangarap Ko Ang Ibigin Ka" was used in the movie of the same title in 2003. The movie was the second team-up of Regine with veteran actor Christopher de Leon, after their comedy-romance film Wanted: Perfect Mother. It was also the film directorial debut of music-video and stage director Louie Ignacio.

Pangarap Ko ang Ibigan Ka was about a lady named Alex (Regine) who dreamed of having a relationship with Raffy (Christopher). He had just lost his wife whom he thought was irreplaceable.

Something happened between them and Alex took this as a sign that there was hope for them to be together. Unfortunately, Raffy later distanced himself from Alex, still believing that his only love was his wife.

In Boy Abunda's interview with Ogie, the singer-songwriter admits that this is one of his favorite songs because "[this is] my song to Regine."

He also said that when he wrote this song, he was in "happy state," like when he finished "Pangarap Ko ang Ibigan Ka" and "Mahal Kita Walang Iba, Kailangan Kita."

When this song was released this year, Ogie had already admitted in public his relationship with Regine Velasquez.

These are just 11 of the well-known songs that Ogie has written and performed during his two decades in showbiz. To his fans, continue counting because as long as Ogie lives, there will be romantic music to fill our hearts.

As he sang to Boy Abunda at the end of their interview, "Tatanda at lilipas din ako, ngunit mayroong awitin..." (the classic "Handog" by composer-singer Florante).