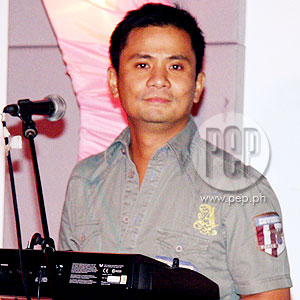 Ogie Alcasid marks his 20 years in the business with a much-awaited concert titled "20/20."

Not everybody gets to reach 20 years in showbiz and still be on top of the game. But multi-talented Ogie Alcasid has managed to do just that.

Many eyes are drawn to him right now as fans await his concert Twenty/Twenty on September 27 at the Araneta Coliseum. The concert highlights two decades of hit songs, gold and platinum albums, and popular TV shows, movies and other collaborations. It would not surprise if said facts are now earning him a fresh dose of respect.

The early years. Pre-showbiz Ogie was just one of your regular guys who walked the corridors of the College of Mass Communications, University of the Philippines-Diliman. His teachers knew him by his real name, Herminio Alcasid Jr.

Aside from being exposed to the media via his college course, as a former Kundirana, De La Salle high school's popular singing group, Ogie had had a taste of the entertainment scene. So it was not farfetched that he had leanings toward entertainment.

In 1988, 21-year-old Ogie Alcasid did penetrate the industry and started a seemingly arduous climb to the top. But Mr. Alcasid was armed to the teeth with talent: He had a voice as brilliant as any top singer, a comedic timing as good as the funniest guy in town, and a gift of gab competitive enough to make him an effective host.

It was in 1989 that the public was given a taste of Ogie's brand of music in his first, self-titled album. That year welcomed hits like: Ako'y Iyong Iyo, Sa Kanya, Dito Sa Puso Ko, and Nandito Ako with the latter winning ‘Song of the Year' awarded by a local radio station. During that period his songs became the national anthem of the broken-hearted.

Ogie was then slowly proving he had a knack to put into lyrics the exact sentiments people were just craving to express.

In the early ‘90s, Ogie started venturing into other media. He tried TV in 1992 via the shows Small Brothers and Mana Mana. On the big-screen, he began being cast in comedies like: 1990's Feel an Feel with the Gutierrez twins, Michael and Madonna with the late Rene Requiestas and onscreen partner Manilyn Reynes; 1994's Ayala and Zobel with Anjo Yllana; Pitong Gamol, Ali in Wonderland, Small en Terrible, Mahirap Maging Pogi, and many others.

Also, his comedic flair was being given due notice in the hilarious TV show, Tropang Trumpo. With his ka-tropa Michael V, Gelli de Belen, Carmina Villarroel and Earl Ignacio, the hit show gave TV viewers another reason to turn on their TV sets.

But it was year 1994 when Ogie's career took on a different and much more personal twist—he met Michelle Van Eimeren.

Ogie has arrived. In 1994, Michelle Van Eimeren was her native Australia's representative to the Miss Universe pageant which was held on our shores. Ogie was the pageant's tour guide.

When medium-framed Ogie met statuesque Michelle, nobody really expected that their friendship would turn into something really serious. But then, Miss Australia eventually became Mrs. Ogie Alcasid.

The same year, Octoarts cashed in on the pair and cast them in Manolo and Michelle Hapi Together, exploiting their popularity as a couple and as individuals.

In the ensuing years, Ogie became more visible than ever. In 1995, he had three movies: Manila Girl: Ikaw Ang Aking Panaginip, Isko: Adventures in Animasia, and O-ha! Ako pa, not to mention an album, A Different Light.

The ‘90s ended with Ogie celebrating 10 successful years in the industry, marking it with the album release of Ogie 10th – All the Best which featured his hit, Mahal Kita, Walang Iba.

"I just trust my instincts. I trust what feels nice, what feels right, what sounds good, what kind of message in a song sounds parang relevant to Pinoys," the singer-actor acknowledged his staying power in an April 2007 interview with Yes! Magazine.

"Gan'un ‘yan e. You gotta have to give to them what they want. Hindi ‘yung you give them what you want to give. Your purpose is to entertain, not to entertain yourself."

Since 2000, Ogie's career has garnered more and more good reviews. Year in and year out, the composer-singer has always given something new to his fans.

His theme compositions also became more prominent with producers getting his services in projects like the TV series Lobo, and movies Urduja, Ploning, and Caregiver, to name a few.

It is admirable to witness the same songwriter of such heartbreaking songs like Kung Mawawala Ka and Nandito Ako become the comedian who brings to life the bratty character Angelina in Bubble Gang.

"I'm at the stage in my life and in my career where, yes, I do have to prove a lot of things but I don't wanna pressure myself to do that," he said. "Parang everything's so good e, so blessed—the TV shows, the recording career, now I'm trying to go back to the movies again... So it's very comfortable, hindi ka ngarag, alam mo ‘yon?"

His physical transformation is also worthy to point out. Through the years, Ogie has shed some weight and lost the somewhat puffy hair, making him look slicker.

Ogie Alcasid is the complete package—he looks good, he sounds good, he is actually very good at everything he does.

So, it must be really trying, if not funny, for Ogie that after all is said and applauded for his 20 years of work in the industry, it is his love life that is now of sharp interest to many.

He had his fans enraptured after his May 2007 revelation to Yes! that: "I'm separated. Michelle and I are separated, and we have been.for a long time...I think what I'd like to say with regard to Regine [Velasquez]...I...I'm in love with her...very much."

Openly acknowledging his relationship with Asia's Songbird Regine Velasquez, Ogie revealed that he had acquired a divorce in Australia and is now only awaiting the annulment of his marriage locally.

It is a little snag to an otherwise ideal picture of the life of Ogie Alcasid. He is singer, songwriter, actor, host of Celebrity Duets, a dad to two lovely kids: Leila and Sarah, an entrepreneur through his Oggie Doggie hotdog stands, and a music producer with his IndiMusic (with Regine, Cacai Velasquez and Raul Mitra as partners)...what more could he ask for?

Continue reading below ↓
For sure, he is no "Loser" as his Bubble Gang character Angelina is wont to say. Ogie is a winner! Twenty years is proof enough.
Read Next
Read More Stories About
Ogie Alcasid, Michelle Van Eimeren, Regine Velasquez, Cacai Velasquez
Post a Comment
Featured
Latest Stories
Trending in Summit Media Network