Riza Santos apologizes to Ruffa Gutierrez, but insists on her innocence 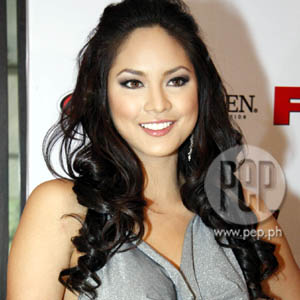 Former Miss Earth contestant Riza Santos finally airs her side about her misunderstanding with I Love Betty La Fea co-star Ruffa Gutierrez. "I didn't realize I was late until Ruffa told me. Had I known, I would have apologized right away. I did apologize to the cast and to the director that night right after she left," says Riza.

Beauty queen turned actress Riza Santos finally airs her side about her misunderstanding with I Love Betty La Fea co-star Ruffa Gutierrez after reportedly coming in late on one of their tapings.

According to Ruffa in her interview on The Buzz last Sunday, September 7, Riza came to their set four hours after her actual call time. And when she finally arrived, Riza did not even apologize to her co-stars and to the staff for coming in very late.

"At that point lang, whether she was stuck in traffic or whether she had a big problem, you know, ang sa amin lang sana, she could have said sorry man lang to the director because all of us were just waiting for her," said Ruffa, who was supposed to finish her last scene for that day with Riza.

And then, Ruffa turned to Riza and told her: "'You know, Riza, next time don't make anyone wait,' sabi kong ganun. ‘If you wanna make it in this business, be professional,' and I just left but still she didn't say anything after that."

In a taped interview with Entertainment Live aired earlier today, September 13, Riza explained, "I actually just got back from Macau that night and my plane was a little bit late and I was informed that I have a meeting with my manager. But I wasn't actually given a call time. I was just informed that I should proceed to the taping.

"I didn't realize I was late until Ruffa told me. Had I known, I would have apologized right away. I did apologize to the cast and to the director that night right after she left."

Riza also told Entertainment Live that she already apologized to Ruffa when they met again during their taping of I Love Betty La Fea last September 8.

"I went to look for her and she accepted my apology. It was very casual, she was very open, accepting," said Riza.

That was not the first time Riza got involved in a controversy with other actresses. During her stay in Pinoy Big Brother Celebrity Edition Season 2, she was pitted against host Mariel Rodriguez. And during the FHM Victory Party last July, Riza was involved in a "snubbing" incident with Kapuso stars Katrina Halili, Alyssa Alano, and LJ Reyes.