Carmen Soo admits she and Jericho Rosales are closer now 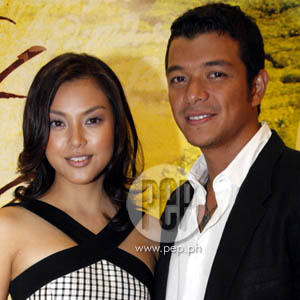 Carmen Soo and Jericho Rosales seem to have taken their chemistry to the next level by admitting that they're both closer than before.

Jericho Rosales and Carmen Soo appeared in The Buzz once again, and this time, the two stars of Kahit Isang Saglit looked closer and sweeter with one another than before. As host Ruffa Gutierrez remarked, "Parang yung guesting nila dito sa The Buzz, parang na feel ko na parang may nagbago. Parang mayroon silang kindatan at may lengguwahe din sila."

"Definitely closer than last week," Carmen revealed, much to the delight of the studio audience.

Not minding Jericho since she can't understand Filipino, Carmen continued, "We've been close all this time."

Cristy, who said that the Kahit Isang Saglit trailer got her hooked, informed Jericho that people say their lives will change with the primetime drama's episode launch tomorrow. How does Echo take this?

Carmen, who looked clueless about what Echo was talking about and how the studio audience positively reacted to his words, only smiled. The receptive Echo offered, "Don't worry Carmen, I'll explain this later."

FEELING THE PRESSURE? Ruffa asked how Echo feels now that the show will finally air (tonight). Does Echo feel any pressure since this is his comeback TV drama? Will Jericho's fans see the same acting prowess during his heyday?

Pressure on his comeback show is one thing, but another kind of pressure—possibly romantic—seems to bug Echo. Cristy revealed that Cristine Reyes has a crush on him. Is he aware of this revelation?

"Nakakadyahe kasi," Echo admitted. At a loss for words, he was finally able to blurt out, "E, sabi ko nga na...maraming salamat."

Carmen, who looked kind of glad when Ruffa addressed her, might've thought that she was about to join the discussion. But first she invited everyone to watch the show.

And then Ruffa surprised her with a quick question. "Carmen, do you feel safe in Echo's arms? Does he take care of you in the set?"

"Oh, yes, definitely," Carmen answered. "He's great and takes care of me and make sure that I'm okay..."