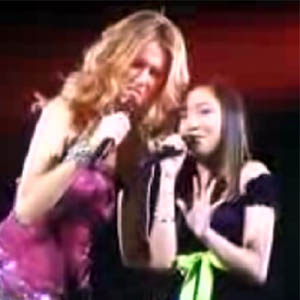 Charice gets her wish to sing with Celine Dion during the international superstar's concert at the Madison Square Garden in New York City. The two did Celine's "Because You Loved Me," which Charice learned when she was just four years old.

"They actually told me about an incredible young singer that she [Oprah Winfrey] discovered a while back. You know, if you watch Oprah last week, you know all about her. This young lady's name is Charice. I'm so excited. She's 16 years old and she's from the Philippines.

"Let me tell you, she has a voice that can literally blow the roof off Madison Square Garden and she just might. But the real story is how Charice and her mom escaped the terrifying experience and had to leave Charice's violent father. You know, to start a life of their own.

"Charice vowed to save her mom from a life of desperation and despair. You know, through prayers and dreams and God-given talent, an incredible voice, Charice entered every singing contest in her native country and [was] eventually noticed by such influential people.

"You know, a show in Oprah and Oprah wanted to take her and took her under her wings. Then, the David Foster joined her. I had the chance to see Charice perform one of my songs on Oprah last week. I have a little bit of difficulty to talk right now because I met Charice, and I'm so emotional... So I'm searching and looking for my words...trying to control my emotion.

"I invited her to come here tonight to sing with me. Where are you sweetheart? There she is, come down, Sweetie."

"Ladies and gentlemen, this is Charice. [To Charice] You look spectacular! Are you shaking? Are you okay? Don't be nervous and, I think, a lot of people, they understand that you are nervous.

"I will give you an image that you can think about. Think that all the people you see in front of you are your brothers and sisters. You're singing in your living room and these are your family. They can't can't wait to hear you sing. I think I know you want to dedicate this song to your mother. So we're gonna sing ‘Because You Loved Me' for your mother."

Mahigpit ding niyakap ni Celine si Charice pagkatapos ng kanilang awitin. Ani Celine, "Your mother is extremely proud of you, and so we are as well. You did amazing and the roof of Madison went up tonight.

"But I'll ask you Charice, when you do Madison Garden, are you gonna invite me?" biro ni Celine kay Charice, na napatawa lang.

"I love you and I cannot wait for you to perform here for a full concert," pahabol ni Celine.