Judy Ann Santos lives life on her own terms 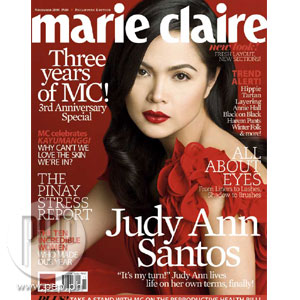 At 30, Judy Ann is having the time of her life. "I'm enjoying being 30. Feeling ko, ang lawak ng isip ko." There is so much to look forward to, and clearly, the best is yet to come for Judy Ann.

Die-hard fans of Judy Ann Santoswill be able to recite a litany of her movies, teleseryes, love teams and leading men, and perhaps even the awards she has garnered in the two decades she has been in show business. But lately, it seems that Judy Ann's resume is filling up with quite a number of extra-curricular activities that the public is not privy to.

"Twenty-two years ko nang na-create yung pagiging artista ko," she tells Marie Clairemagazine as she graces the cover of their November issue, "After a while, you get used to it and you want to go to another level in your life."

In this new stage of her life, Judy Ann finds herself channeling her creativity away from the spotlight and into the kitchen, cultivating her passion for cooking. She is currently completing her second culinary arts course at the Center for Asian Culinary Studies under the guidance of chef Gene Gonzalez.

"Siguro paisa-isa.I don't want to produce something heavy for the meantime," she says, revealing that what she wants for now is to simply enjoy the experience of making independent film projects. "Gusto ko lang makatulong."

Outside of acting and filmmaking, Judy Ann is busy as head of the Touch A Heart Foundation, which addresses the educational and agricultural needs of a community of Aetas in Bataan, and provides medical supplies for the hospital in Cuyo Island, Palawan. A housing project to help revive the careers of veteran actors, small-time comedians and action film sidekicks is also in the works.

This November, Marie Claire magazine honors Judy Ann as one of 10 Women of the World for 2008, recognizing her for her craft, her staunch support for the country's independent film industry, and her commitment to foundations that help others in need.

All of these accomplishments stem from the fact that Judy Ann has finally taken the reins on her own life. "Most of the time, I'm the one who goes with the flow. I think it's about time na ako naman yung masunod," she tells Marie Claire. She points out that she has given much of her life to the showbiz industry. "I suppose people will understand me if I give some time to myself."

Read more about her plans for the future in the third anniversary issue of Marie Claire this November. Marie Claire is available in newsstands and bookstores nationwide.