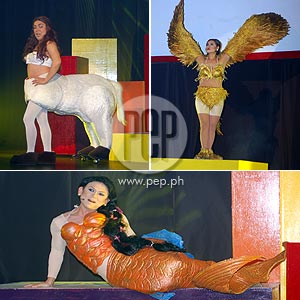 John Lapus, Candy Pangilinan, and Jon Santos invade the Music Museum to deliver fun and laughter via the live comedy show, Da Spooftacular Showdown, produced by ASAP Live!
Gathering Jon Santos, John Lapus, and Candy Pangilinan in one show promises nothing but pure riot. And that's what the live comedy show billed as Da Spooftacular Showdown turned out to be, as witnessed by PEP (Philippine Entertainment Portal) last November 15 at the Music Museum in Greenhills, San Juan.

In a press conference prepared by ABS-CBN a few weeks before the opening night, John Lapus quickly dismissed the "sapawan" issue expressed by some quarters by explaining that each of the cast members was given equal role assignments.

True enough, right from the opening to the last skit, the three veteran standup personalities displayed their brand of comedy mostly as a team. As a result, jokes ran on high gear throughout the evening.

The show started with Jon, John, and Candy rendering their own take on Anne Curtis's primetime series, Dyosa. The crowd chuckled as the three tried their utmost best to outdo each other in vying the right to assume goddess status.

OLD AND NEW SKITS. As promised by director Phillip Lazaro, Spooftacular witnessed the debut of new characters like Candy's version of the nerdy ugly-duckling Betty La Fea and Charos Pempengco.

John's take on beauty queen Janina San Miguel was hilarious as he effectively brought back to life Janina's famous stint in the question and answer segment of this year's Bb. Pilipinas pageant.

One of the well-received skits that night was Jon's version of beauty expert Vicki Belo, who was christened as Vicki Bolo that night. Donning a white hospital gown, Jon kept the audience in stitches as he warned everyone of fake surgeons around the metropolis.

The situations he presented were blown up for maximum comic presentation. Vicki Bolo's botched romance with fellow surgeon Manny Kawayan drew laughter from the crowd as well as the segment where he, along with Manny, came down to the audience to offer bits of beauty advice.

As expected, the characters identified with Jon (Ate Vi) and John (Kris Anino) once again emerged. For the nth time, both comedians showcased their mastery of playing the two famous characters, making their respective performances effortless.

Meanwhile, John wowed the audience when he was able to imitate the distinct tone of voice, mannerisms, and hearty chuckle of Kris. The portrayal came with some of the known personal issues faced by the game show host—all dished out with tons of humor.

Serving as special guest that evening was Pokwang who likewise traded punch lines with the headliners. Pokwang impersonated Ruffa Gutierrez's bitchy character in I Love Betty La Fea and later on assumed the role of feisty manager Annabelle Rama.

Candy's Nora Aunor impersonation was also hilarious owing a lot to the familiar movie quotes associated to the Superstar. The reported violent reaction coming from the Noranians did nothing to tone down Candy's skit.

All in all and despite a few misses, Da Spooftacular Showdown live up to its promise of giving fun and entertainment to the public, which came to the venue hoping to experience laughter at least for two hours. To quote that line from a Beatles song: "A splendid time is guaranteed for all."

Catch Da Spooftacular Showdown every Friday and Saturday for the entire month of November until the first weekend of December at the Music Museum in Greenhills, San Juan.