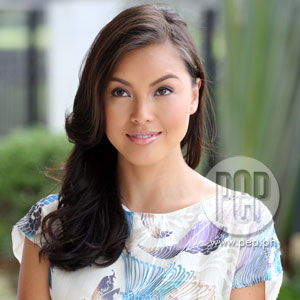 "[Philippines] have a very strong [entertainment industry]. It's like Bollywood or Hollywood, this is... Filowood or Filiwood!" quips Malaysian actress Carmen Soo.

Filipinos knew about Carmen Soo when celebrity couple Jericho Rosales and Heart Evangelista broke up earlier this year. The Malaysian actress-model was blamed for the breakup, particularly because she was doing a Philippine TV series titled Kahit Isang Saglit with Jericho.

But most Pinoy TV viewers know a little about the star who plays "Garie" in Kahit Isang Saglit.

At 17, she started modeling in Malaysia and left for Hong Kong to pursue this career. Not long afterwards, she had a minor acting role in a Jackie Chan movie titled Gorgeous. And then she landed a leading role in Aaron Kwok's musical special. Her acting career includes roles in the stage plays The Girl from Ipoh and Rose, Rose, I Love You.

Carmen stayed in Manila for a couple of months for the taping of the joint project of ABS-CBN and Malaysia's Double Vision, Kahit Isang Saglit. When finished, Carmen went back to Malaysia for the shooting of a Malaysian comedy film My Spy, which will be shown ten months from now, according to Carmen.

She came back last Tuesday, November 18, in time for the photo shoot of her newest endorsement, Petit Monde, which took place last Wedneday, November 19, in Quezon City.

Carmen may be staying in the country for a while, not only for the said endorsement but also for possible movie or TV projects with ABS-CBN.

PEP (Philippine Entertainment Portal) took the opportunity of covering this photo shoot to ask Carmen about the things she liked about the Philippines during her stay so far.

Pinoy hospitality. I don't know, where do I start. I think the people, to begin with. I came here to work and it's important to me because I stay here for a long time. So, I'd say that the Filipino hospitality, everyone has been gentle, you know, the language, and very sweet. [It's] very Asian quality so it's [easy to] adapt and be comfortable and feel like home.

Shopping malls. I love the fact that there are a lot of shopping malls. You know, I can go around, it's one of my favorite pasttimes.

I think I go to TriNoma a lot because it's near my hotel. I like to go to Greenbelt because it's different, still so much to discover. Shangri-La mall, they have a lot of things there, so it's convenient.

Scenic places. You know, when we shoot [Kahit Isang Saglit] I got to visit a lot of places. I get to see even somewhere not far. From there, I get to know how the way people lived here and, you know, everyday life. For example, if I'm just a tourist I might just go to the mall, go to the beach. It's just like going back down to basics and see how people live their lives [on a] daily basis.

Banawe. Talking about places, I also get to go to places, far-off places like Subic and Banawe. I think I've read that Banawe is 2,000 years old. We did quite a lot of things there—really amazing views, really amazing backdrop for the show. It's just nature, you know, beautiful sceneries

Boracay. The islands are beautiful. I think some of the best I've ever been to is Boracay. It's extremely beautiful—the white sand and clear sea, clean sea. I hope it stays that way. The government of the Philippines should take care of the environment.

Local dresses. The dresses, like Petit Monde. When I was shopping around the Philippines, I wasn't able to discover local brands because I go to the easier things, the one that's available in Malaysia as well. So, I'm glad to have found one. Then, I can be dressed up well for my next show and when I do my guestings as well.

Tomas Morato street (Quezon City).That's my second home. I thank God for that because it's a stretch where I can get to Starbucks, 7-Eleven, bank, restaurants. I'm very thankful for Tomas Morato because I don't drive in Philippines, so I can walk all through the different restaurants and get food. It's all there!

Jericho Rosales. I read somewhere, someone said that he's the ninth national treasure of the Philippines. I think he's become a friend of mine and I'm glad to have found him as a new friend.

I think, compared to Malaysia, the industry is moving along. For example, the impact of shows really hit the people. So, I think that's one of the first things I would say about the Philippines. They have a very strong [entertainment industry]. It's like Bollywood or Hollywood, this is... Filowood or Filiwood! Ha-ha!