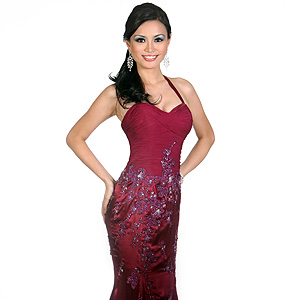 "I feel very fulfilled that I made it to the semi-finals, and it wouldn't be possible without the prayers of my countrymen. I already feel so blessed, and having the chance to represent the country is already a victory in itself," said Bb. Pilipinas-International 2008 Patricia Fernandez in a statement following her stint in the pageant held last November 8 at Venetian Hotel in Macau, China.

Despite failing to clinch the 2008 Miss International Pageant title, Patricia Fernandez of the Philippines still managed to make her countrymen proud after making it to the semi-finals of the beauty pageant. The recently concluded event was staged last November 8 at the Venetian Hotel in Macau, China.

Patricia was joined in the semi-final round by other representatives coming from Japan, Ecuador, Lebanon, Turkey, Venezuela, Puerto Rico, Poland, Colombia, Czech Republic, Spain and China.

BEAUTY AND BRAINS. Patricia graduated from the University of the Philippines where she obtained a degree in BA Speech Communication. As for her hobbies, the pretty lass cited swimming, singing, and playing the piano as some of the activities she enjoys doing.

Before going to Macau to compete, a send-off party was organized exclusively for Patricia at the Mandarin Suites at Gateway Mall in Cubao, Quezon City where she asked everyone to pray for her. During the occasion, Patricia brandished her piano-playing skills before the guests while singing kundiman tunes.

She's also adept in speaking Mandarin and Niponggo, and had months of extensive training at the Dale Carnegie Training—the celebrated UK-based personal and management development institute.

Curiously, Patricia's interest in beauty pageants only intensified after she wrote a thesis on the subject. "It opened my eyes to this industry. Now I really want to get the chance to represent the country," she revealed during an interview conducted by the Bb. Pilipinas committee.

The Philippines has produced four winners in the Miss International pageant since its inception in 1960: Gemma Cruz-Araneta (1964), Aurora Pijuan (1970), Melanie Marquez (1979), and Precious Lara Quigaman (2005).