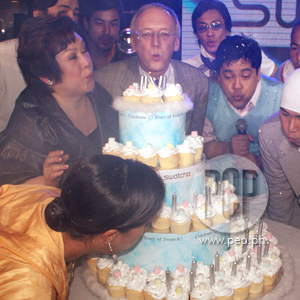 Swatch celebrates its 25th year of giving the world stylish but inexpensive durable watches. Gift Gate owner Virgie Ramos (in brown dress, blowing candles) commemorates the occassion by throwing a party and launching a new Swatch store in Greenbelt 5, Makati City. Joining her in celebration are her celebrity friends, models, and supporters of Swatch.

Last December 3, in celebration of Swatch's 25 years of giving the world inexpensive but stylish and durable watches, Gift Gate—the merchandising company that exclusively distributes Sanrio items and Swatch watches—opens its new Swatch store in Greenbelt 5 in Makati City with a launch party held at The Gallery of Greenbelt 5.

Enter Nicolas G. Hayek, owner of a Swiss business consulting firm. He assessed the situation, put down his money, and in 1982, started Swatch—the Swiss watch company that produces fashionable and quality Swiss watches. Its main difference from other Swiss watches is its use of durable plastic for its casing (well-known and expensive Swiss watches like Longines, Breguet, Blancpain, Omega, Tissot, and Oris have metal casings).

While not getting the title of being the first Swiss watch made of plastic (M-Watch by Mondaine of Zurich beat them to it a week ahead), Swatch is the first Swiss watch to use its casing as not only an outer shell but also as a mounting plate for its 51 parts (a normal quartz watch has 91 parts).

From the first models sold in 1983, Swatch watches have already sold 300 million plus units around the world which greatly helped the Swiss watch industry to catch up with its Asian competition.

Since then, it has become one of the most sought-after items by the fashion-conscious and those who want reliable, durable and stylish watches. Swatch became one of the top-selling products sold in Gift Gate that it later on had to have its own store.

Today, its latest store not only carries the new models (under the Swatch Beat and Swatch Bijoux lines) but also has the all-time favorites and classics such as the Maxi, the Pop, the Skin, the Chrono and Irony (Swatch watches in metal casings that came out in 1995).

THE SCENE IN THE PARTY. Guests arrive in almost all-white ensemble for the 25 Years of Chillin' party theme. Former actor and now stage and musical director Roel Santiago was judged most fashionable male of the night, while Tessa Prieto-Valdez in an ice princess inspired get up with matching Hello Kitty handbag wins the most fashionable female of the night award.