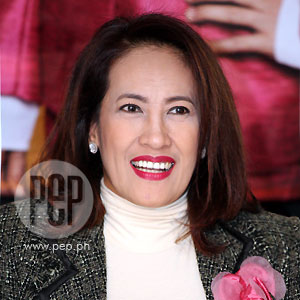 Comedienne Ai-Ai delas Alas revealed that she "married" a guy in Las Vegas in 2002. But she refused to divulge his identity.

Ai-Ai delas Alas was caught off-guard yesterday, December 18, when she was asked about her wedding that supposedly took place in Las Vegas in the past. Many people expected that she would deny the rumor. Instead, she paused dramatically before answering, "Ah...noon pa yun, kumare, nung 2002. Pero hindi ko puwedeng sabihin kung kanino."

Right after the presscon, Ai-Ai revealed details about the wedding. Why did she marry the mysterious guy six years ago?

The star of Ang Tanging Ina N'yong Lahat then clarified that she did not have a same-sex marriage. She also revealed that she and the guy had been together for a year before they decided to wed in Las Vegas. Ai-Ai recalled that the wedding just cost $700.

Is this wedding legally valid?

When asked if she has regrets about the mock wedding, she said, "No, hindi naman. Masaya siya saka experience siya."

Is the guy from ABS-CBN? Ai-Ai refused to answer and exclaimed, "Ayoko nang magsalita!"

Before the interview ended, she insisted that the man she married was not Robin Padilla.