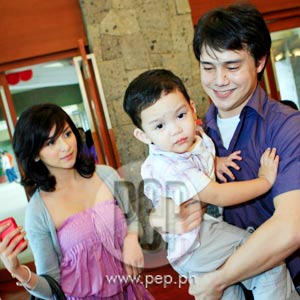 For the first time, Patrick Garcia (right) comes face to face with Jennylyn Mercado (left), with whom he had a publicized rift two years ago, and hugs his son Alex "Jazz."

These were the simple yet meaningful words of Patrick Garcia when asked about the status of his two-year-old rift with ex-girlfriend Jennylyn Mercado.

It came hot on the heels of Jen's (Jennylyn's nickname) arrival at the first birthday party of his niece, Claire Kendra, the daughter of his sister Chesca with cager Doug Kramer, at the Alabang Country Club yesterday, June 27.

Just before the birthday party began, the happy encounter took place. The Kapuso actress showed up with baby Jazz in tow. Patrick came rushing to the door, where he finally got to hug his almost two-year-old boy for the first time.

There was a bit of awkwardness, which became insignificant as all-eyes were on the father and son.

Does that mean that things are already well between him and Jennylyn?

It will be recalled that the ex-couple's falling-out was primarily caused by their differences, which were further magnified by too much publicity. From their relationship problems to their breakup, including the issues of paternity and possible arrangements for financial support—all these became the hot topics in showbiz for several months.

The recent development seemed surreal to the 29-year-old actor. Not that he didn't hope that it would happen, but Patrick was just overwhelmed because his prayer—which was to hold his son—was finally answered. He was elated as well over the fact that both he and Jennylyn have taken the first few steps to bridge the gap.

Is he also happy that Jen has found a new love in Dennis Trillo?