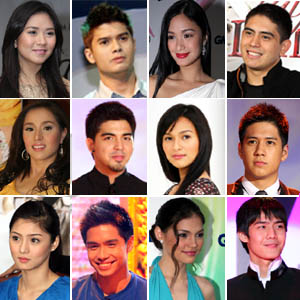 PEP (Philippine Entertainment Portal) lists down the 12 stars we think will make an impact in the Year of the Ox. They may not be newbies in the showbiz industry, but they are the names to watch for this year.

These stars have established themselves as the forces to reckon with in an industry where new faces sprout like mushrooms. They were given breaks for the first time and have proven that they can topbill a show or a movie, while the others, we feel, deserve to be given breaks and let them shine.

They are the stars who in the next few months will be mentioned so often in showbiz talks shows, tabloids, broadsheets, and here in PEP. Their every move will be observed by their fans and critics as well.

Most likely to be crowned Box-Office Queen this year because of the box-office success of A Very Special Love opposite John Lloyd Cruz, Sarah Geronimo is on her way to being one of the most important stars of 2009. Sarah is actually a triple threat among her contemporaries—she can sing, act, and host. With her newfound magic in the box-office, it's inevitable that she gets more projects in movies (a sequel of A Very Special Love is now in the works) and television (an upcoming teleserye). Her singing career is also one of the brightest in recent years, producing hits from one song to another.

Who would have thought that after being considered a has-been even before reaching her peak, Heart Evangelista is now the current queen of primetime television via her first solo soap as a Kapuso star, Luna Mystika. After transferring from ABS-CBN to GMA-7 and changing management, Heart was able to resurrect her showbiz career. After Luna Mystika, Heart is expected to star in the Pinoy adaptation of the hit Koreanovela Full House.

Although she was criticized for her decision to leave GMA-7 and move to ABS-CBN, Cristine Reyes was able to prove that she made the right choice. She was able to establish herself as one of the most desirable young sexy actresses in her generation. Her turn as Eva Fonda is one of the most daring performances ever tackled by a young actress and she was able to pull it off with just the right sensuality. It will be no surprise if Cristine would get more juicy projects in the future, not only in television but in movies as well.

Love and pregnancy may have stalled Jennylyn Mercado's career for a while, but she is about to make a grand comeback this year starting with GMA-7 Sine Novela Paano Ba ang Mangarap?, where she will reprise the role originally portrayed by acting great Vilma Santos. Jennylyn is out to reclaim her lost glory and she might give the recent crop of young stars a run for their money.

With most of the young stars going the more daring route, Kim Chiu remains one of the most wholesome personalities in showbiz. Kim still gets prime projects from her home network, ABS-CBN. She will be next seen in the upcoming primetime soap Tayong Dalawa, with perennial screen partner Gerald Anderson and Jake Cuenca.

Non-believers suddenly became believers as Rhian Ramos proved that she can also carry a show; thanks to Lalola, where she essays the role of a playboy who was turns into a woman because of a curse. Interestingly, negative issues about Rhian suddenly stopped when Lalola started airing. Proof of this is her noticeable absence on showbiz talk shows explaining her side about a certain issue. After Lalola, Rhian might be reunited with Richard Gutierrez in the Pinoy adaptation of the swashbuckling series Zorro.

There's no doubt that JC de Vera is one of the hottest young actors today. After giving commendable performances in the heavy drama Babangon Ako't Dudurugin Kita and the romantic comedy series Lalola, JC is now considered one of the better actors of his generation. JC might be GMA-7's arsenal in the drama department, along with Mark Anthony Fernandez.

Gerald Anderson's team-up with Kim Chiu is still one of the top love teams in the country. Gerald is also showing great promise in acting, tackling more challenging roles like that of a rebel in Your Song Presents My Only Hope and a cadet in the upcoming ABS-CBN primetime series Tayong Dalawa.

Mark Herras's showbiz career was obviously affected when his love team with former girlfriend Jennylyn Mercado took a break because of the young actress' relationship with Patrick Garcia and her pregnancy. But their reunion in a two-part special episode of Dear Friend proved that they still have loyal fans who want to see them together—onscreen and even in real life. Mark will be paired again with Jennylyn the upcoming afternoon soap Paano Ba ang Mangarap?.

Being groomed as a hunky actor, Aljur Abrenica might be the next big thing in the Kapuso network. Given more time, the StarStruck 4 Ultimate Hunk will surely emerge as one of the most important young actors in his generation. Aljur is currently seen in the top-rating primetime fantaserye Luna Mystika.

The first-ever Pinoy Sole Survivor has already developed a fan base that puts him in the league of some of the most popular stars in the country. After winning Surivor Philippines, JC was very open in saying that he wanted to try his luck in showbiz and lady luck seems to be on his side. JC just signed up with GMA-7 and rumor has it that he will be introduced in the Richard Gutierrez-KC Concepcion movie When I Met U. A source also told PEP that the San Sebastian varsity player might be paired with Marian Rivera in another movie.

Pinoy Big Brother Teen Edition Plus runner-up Robi Domingo is emerging as one of the future matinee idols of ABS-CBN. His wholesome image and happy disposition make him a stand out among his contemporaries. Aside from acting and studies, Robi is now making a name for himself as a VJ in MYX channel.

Aside from these names, watch out for the newcomers that will come from the third season of Pinoy Big Brother Teen Edition and the Batch 5 of StarStruck which are slated to happen this year.