Top Ten TV primetime shows of 2008 (based on NUTAM) 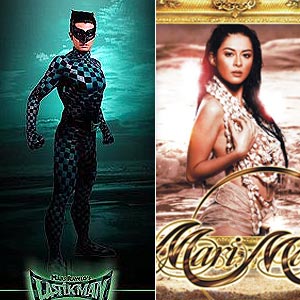 Lastikman emerged as the top-rating program of 2008 after it bested other primetime programs. The Vhong Navarro fantasy series generated a total rating of 36.4 percent, beating Marian Rivera and Dingdong Dantes of Marimar for the top spot.

Figures make up a competition. The same goes for television programs offered to the waiting public by the TV networks.

In a conversation with PEP (Philippine Entertainment Portal) in late 2007, AGB Nielsen's General Manager Maya Reforma explained that the survey is done through a special device attached to the television sets of the chosen households in a specific area. The device records the channels and the corresponding programs being viewed by the household at a given hour, thus explaining the daytime and primetime category. The stored data serve as the basis for the final figures, which are then assessed by the research firm's staff.

With 2008 behind us, it is interesting to list down the top primetime programs of the previous year. Note that this is based on NUTAM (Nationwide Urban TV Audience Measurement), which has a panel size of approxinately 1,670 households nationwide.

It is a known fact that the evening slot is considered as the most significant since viewership is higher during the period. Hence, advertisers—always on the lookout for any opportunity that would allow them to reach a wider market—are particularly fond of the timeslot.

MARS RAVELO'S LASTIKMAN. The Vhong Navarro action, drama fantasy series seen on ABS-CBN debuted on September 24, 2007 and aired its final episode on January 25, 2008. Lastikman was based on a popular comic book character created by Mars Ravelo. The show generated an overall rating of 36.4 percent to lead the primetime race for 2008.

MARIMAR. The phenomenal success of the Mexican soap series prompted GMA-7 to do a local adaptation, which also served as young actress Marian Rivera's ticket to fame. Actor Dingdong Dantes likewise benefited greatly from the show as his image dramatically shifted from teenybopper to mature actor. Marimar was a consistent top-rater in the Mega Manila race as well as a strong player in the nationwide contest. Opening on August 13, 2007 and running until March 14, 2008, Marimar earned a total rating of 34.8 percent.

PATAYIN SA SINDAK SI BARBARA. Considered one of the scariest and most successful horror films in local cinema, Patayin Sa Sindak Si Barbara, the television version, starred Kris Aquino, Jodi Sta. Maria, Albert Martinez, and Susan Roces, among others. The series clocked in only a relatively small total of 15 episodes, yet the show made a huge impression both in the Mega Manila and nationwide survey.

DYESEBEL. Another Mars Ravelo graphic creation portrayed on television. Dyesebel brought back the winning tandem of Marian Rivera and Dingdong Dantes following the success of Marimar. Just like its predecessor, Dyesebel was a strong fixture in the ratings battle, dominating the Mega Manila race from start to finish.

THE SINGING BEE. A local franchise of the popular US singing game show, The Singing Bee featured Cesar Montano as main host, together with The Honebees led by Mel Villena. The show hit home with local viewers as its concept falls directly in line with the Pinoy pastime, videoke. The show premiered on April 21, 2008 and is still on air.

DYOSA. Anne Curtis's current series continues to gather strength as shown by its rating figures in the past weeks. The fantasy series features Anne Curtis, Luis Manzano, Sam Milby and Zanjoe Marudo. The show amassed a total rating of 32.2 percent to place seventh overall in the top-rating primetime programs of 2008.

LOBO. Angel Locsin's first series since joining ABS-CBN was not particularly a big threat in the Mega Manila ratings. But the NUTAM contest painted a totally different story. Lobo's success in the nationwide survey definitely proved that Angel still had a strong grip on the viewers, just like when she top-billed the GMA-7 programs, Darna and Mulawin.

TV PATROL WORLD. The country's longest running news program debuted on March 2, 1987 and continues to deliver the hottest news in and out of the country. Presently hosted by Ted Failon, Karen Davila and Julius Babao for the weeknights edition and Alex Santos and Bernadette Sembrano during weekends. TV Patrol earned a total of 31.2 percent and wound up on ninth place.

I LOVE BETTY LA FEA. ABS-CBN's local remake of the Colombian popular series, which stars Bea Alonzo and John Lloyd Cruz, premiered on September 8, 2008. Like Dyosa, the show continues to gather momentum in entering 2009. For 2008, I Love Betty La Fea garnered a rating of 30.5 percent to clinch tenth spot.