The Marian-Dingdong tandem: where it started and where it's headed 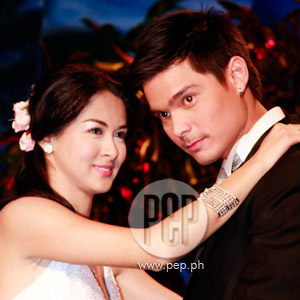 Some eyebrows were raised when the pairing of Dingdong Dantes and Marian Rivera was announced by GMA-7 less than two years ago. Back then, the guy had successful TV series under his belt, but his "leading man" status was not yet synonymous with "established." The lady, on the other hand, was plucked out of the afternoon slot to become the "new queen of primetime TV." It was a big risk, which turned out to be a phenomenal success two soaps lat

Marimar started it all for Dingdong Dantes and Marian Rivera.

Since 2001, Dingdong has been a staple figure in the primetime block of GMA-7. He had his share of leading ladies—from Tanya Garcia to Karylle to Iza Calzado—but the "ultimate leading man" tag got attached to his name after playing the role of Sergio Santibañez.

Marian, on the other hand, has been in the business for less than four years. She officially made her showbiz debut in 2005 via the afternoon drama, Kung Mamahalin Mo Lang Ako, and was first seen in the most-watched time slot of Kapuso network when she played the mom of Super Twins, portrayed by Jennylyn Mercado and Nadine Samonte.

He was a handsome actor who had yet to prove his versatility, while she was a pretty face out to make a mark with the Pinoy viewers.

As fate would have it, Marian was christened with the title "new queen of primetime TV" when she bagged the coveted role of Marimar in 2007.

For his part, Dingdong became the object of women's fantasy when he returned to the TV screen with a leaner build, a tanned skin, and a more charismatic appeal. He even landed the cover of "Cosmo Bachelor Bash" that same year.

And that was how journey of the Dingdong-Marian love team began.

The following year, they did the TV remake of Dyesebel, which topped the Mega Manila ratings and ranked second in the NUTAM (Nationwide Urban TV Audience Measurement). Add to their growing list of accolades Marian's FHM Sexiest Female title, plus, their numerous endorsements—whether individually or as a tandem, Marian and Dingdong became very visible with their television commercials and billboards.

And their love team did not only sizzle on the set, but also on stage. Yes, both of them have what it takes to conquer the dance floor. Dong, the actor's nickname, started his career as a member of Abztract Dancers; while Marian took dance lessons, and it paid off—she earned rave reviews for her signature kembot as Marimar.

They hit the jackpot. They cracked a formula.

SUCCESS STORY. The idea of pairing them up was quite a big risk on the part of GMA-7, but the Kapuso executives had high hopes—primarily because of the phenomenal success of the original Marimar.

And they looked good together. During their promo, the viewers instantly sensed the chemistry.

With bated breath, the supporters and detractors waited, and based on the ratings, they liked what they saw.

The story had the nation sympathizing with the fate of Marimar, and rejoiced when she bounced back with a vengeance. It hit the masa right to the core.

Marian did a fairly good job in portraying the most coveted role of Marimar. Gone was Thalia's signature dreamy look and it was replaced with Marian's ingenuous style.

Critics expected more from the "transformation" episode, where Marimar turned into Bella Aldama. The hottest female star of GMA-7 did not have the inherent sophistication of the queen of Mexico novella, but her performance was a little more spontaneous.

Actually, if I were to scout for an actress in local showbiz to play Marimar, I would still pick Marian. She exuded sex appeal, and didn't have to be blunt about it.

Dingdong was a different story. He resurrected the character of Sergio with such manly appeal, sans the hairy chest. The role catapulted him into the "ultimate leading man" status. Ladies fell in love with his passionate ways and swooned over his handsome features.

Good project, good promo, and good packaging had the TV aficionados embracing Marian and Dingdong with such fervor. The DongYan love team's legion of fans was born.

Who doesn't love the half-woman, half-fish creature? When this Carlo J. Caparas-masterwork made its movie debut in 1953, it became a hit. Four more Dyesebel movies were shown, and playing the mermaid became part of most actresses' list of dream roles.

Marian and Dingdong once again won the hearts of the viewers, and did it more effortlessly this time.

In less than two years, they became the brightest stars on television. But their team-up was not as successful in cascading the magic on the silver screen—why?

"MILD HIT" MOVIE. Before the DongYan fans react, let it be made clear that the phrase "mild hit" came about because One True Love failed to make it to the Top 10 blockbuster movies of SM Cinema and Robinsons Movieworld, which both have the largest chains of theaters in the country.

Producers kept mum about the actual box office results. Some showbiz insiders claimed that it's fairly good, but not good enough if they would base it on the original expectation.

The skeptics and the cynics had two theories: first, not-so-good project, and second, not-so-effective build-up.

Fans liked the chemistry, but the movie capitalized on showcasing the acting prowess of Marian and Dingdong. Performance-wise, the two did not disappoint; but the kilig element, which became almost synonymous with their love team, was kulang.

Dingdong's breakup with his real-life girlfriend, Karylle, could not exactly qualify as a good build-up for the moviegoers. The tittle-tattle insinuating Marian as the alleged cause did not help either.

The issue created so much noise that it became a case of real-overshadowing-reel kind of publicity. People became more interested in the controversy rather than the upcoming movie.

Kilig factor did not become evident in both real and reel aspects. The Dingdong-Marian magic was totally missed.

INDIVIDUAL ISSUES. Dingdong's breakup was deemed a positive move for the actor. His "single-status" made him even more delectable to the female fans. Late last year, he was hailed as one of World's Sexiest by E! television. He placed third and joined the ranks of David Beckham.

But that was not the case for his leading lady. Fate had been quite cruel to Marian given the "plastikada" and "suplada" comments of her critics. Even PEP (Philippine Entertainment Portal) received several emails from anonymous people claiming that busy actress was not overly generous with her time for picture-taking and autograph-signing.

Last year had been tumultuous for both of them, but they want to leave the past behind and focus on their next television series.

Once again, Kapuso network is taking a big risk, but the lady executive said they are well-prepared. "We love a challenge. La Lola was totally unfamiliar to everybody, and yet it is so successful..." said Ms. Lilybeth.

They say the project is probably the last team-up of Dingdong and Marian. And the burning question now—can they rekindle the magic with the viewers?

Again, we all wait with bated breath.