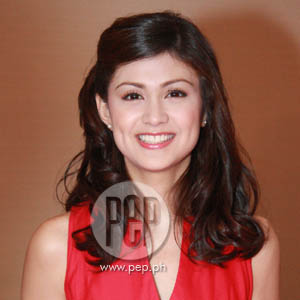 Is Carla Abellana going to be a Kapuso or Kapamilya? "No, I'm not exclusive with anybody yet," she said. "It really depends on them, I'm really not sure, I'm really open to any offer..." The daughter of Rey PJ Abellana was discovered by Regal's lady boss Roselle Monteverde-Teo at the wedding of Cheska Garcia, and is now being managed by Arnold Vegafria.

These questions were written all over the faces of the people who got invited to the intimate press launch of the newest Regal baby last week at the Imperial Palace Suites.

Her name is Carla Abellana.

And yes, showbiz blood runs through her veins. The 20-year-old newbie is the daughter of actor Rey PJ Abellana and the granddaughter of veteran actress Delia Razon.

But she admits, "I'm not at all a great actress." So, right after finishing her psychology course at De La Salle University in Taft Avenue, she's back to studying again—and this time, her lone subject is acting.

Her dad has already given her some pointers: "[His] advice is to be careful, to be nice to everybody, always be humble and grounded..."

The discovery of Regal's lady boss Roselle Monteverde-Teo got her first taste of the limelight as a commercial model when she was 12. Showbiz had been at the back of her mind, but she never considered joining it seriously.

She told the press, "It's really about taking advantage of the opportunity, because, you know, that doesn't come in a normal person's life. So it's...for me, it was extended, so I said, might as well do it. It's a big risk, but I'm very excited."

During the night of her first presscon, she had her first taste of intrigue. Some showbiz writers teased her about being a Marian Rivera-look-alike. They finished the same course and both went to La Salle (though the Kapuso actress was an alumna of La Salle Dasmariñas).

Her simple reaction, "I have respect for her as an actress."

Does she have a wish list of people she wants to work with?

"Omigosh, anybody," was her candid reply. "It doesn't have to be a big actor, or a big actress, just looking forward to meeting anybody, and getting to work on anybody. So, wala namang expectations, kahit sino talaga...kahit girl, okay lang, kahit older, kahit younger."

Does she have a crush in local showbiz?

She dropped the name of Richard Gutierrez and Piolo Pascual. She added, "Very good actors..."

And given the chance, she would want the son of Eddie Gutierrez and Annabelle Rama to be her first leading man. Actually, she auditioned for the role of Richard's leading lady in his upcoming TV series Zorro.

But before we all get too excited at the prospect of seeing a new tandem in showbiz, and before the males start dreaming about her as their leading lady, Carla is "quite taken." She is exclusively dating the 6'4" cager JC Intal.

She related that "he was actually the first to get excited" at the thought of Carla entering Tinseltown.

When asked if she's willing to accept sexy roles, "No" was her quick answer. She continued, "That's the least thing, last thing I'll do, so, hanggang dun lang, that's until where I can go."

The former pre-school teacher has no great expectations. "No promises [either], just that we will do good, we will do our best, and we will grab all opportunities." She signed a 12-movie contract with Regal.

So next time you see a lady with a show-stopper of a smile, the good genes of her lola Delia, and the dimples of her dad PJ—her name is Carla Abellana.

She does resemble a Kapuso star, but she's determined to shine and make her own mark.