Celebrity Pairs and their Body Language 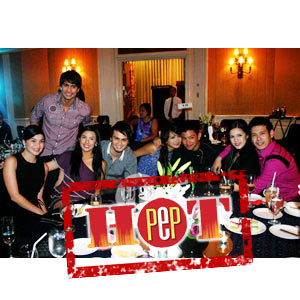 Reading the body language of stars can be tricky. Is it for reel or real? Hard to tell.

(Body language, according to the The Oxford Pocket Dictionary of Current English, is the process of communicating non-verbally through conscious or unconscious gestures and movements.)

The public can assume this or that. But stars can always deny claims, even if their body language already states the obvious.

Status: They broke up late last year, but they are back to being friends.

Body Language: The short distance that separates them can be a good indication of their comfort level at present. The book Body Language Speaks explains: "Proximity can tell so much about the closeness of two people. If a guy moves closer or nearer to you, it means that he wants you be part of his personal space."

In the case of the Dyosa stars, things aren't back to normal yet.

Body Language: The Myx VJ slightly leans on the chest of her co-host in Pinoy Dream Academy. Her posecan be interpreted as a gesture of trust. Billy's extended arm suggests that he's either being protective over Nikki or he simply feels comfortable with the singer-host-actress. Their relaxed position implies that: (1) They know their priorities (2) They are taking their time (3) They're almost a couple!

Body Language: There's a lot of trust and security in their relationship, and it's close to reaching that level where one cannot live without the other.

Status: Dating, but some insiders claim that they've been a couple for several months now

Body Language: John is really enamored with Shaina, who is getting used to having the brother of Camille Prats around. The two look like they're more than friends, even if they have been telling the press that they're still in courtship stage.

PEP has more interesting bits and pieces about celeb couples in the LOVE MONTH SPECIAL Microsite, click to log on.