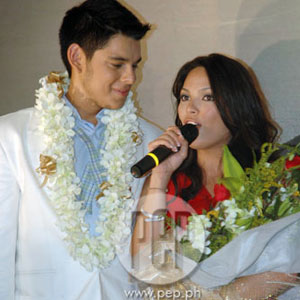 It was August of last year when the first project of Richard Gutierrez and KC Concepcion made its silver-screen debut. Star Cinema's For the First Time showcased the acting prowess of the Mega-daughter and the film's location, Greece.

Showbiz is in their blood.

As a kid, she was not very visible in the entertainment scene, but the public was always fascinated about the adorable mega-daughter. Her famous parents had their share of showbiz intrigues and issues, but she remained sheltered by her mom from the prying media.

KC led quite a normal life. She spent her grade school at Poveda Learning Center (Ortigas), where a teacher described KC as "very shy." She studied high school in International School, where she harnessed her singing and dancing talents.

In 2001, at the age of 16, she showed up at an audition for the cast of Little Mermaid, unexpectedly and unescorted. She bagged the role of Sapphire and received good reviews.

Two years later, she went to the American University of Paris to pursue her course in International Corporate Communications, minor in Theater Arts.

Richard Kristian Rama Gutierrez, on the other hand, is the son of 1960's matinee idol Eddie Gutierrez and the feisty talent manager Annabelle Rama.

He began basking in the limelight at a young age. He and his twin brother Raymond became the faces of Nestle Twin and the Kambal Tuko of Philippine Cinema.

After several projects, Richard stepped out of showbizlandia to focus on his studies. In 2002, he finished high school at De La Salle Santiago Zobel in Muntinlupa.

TINSELTOWN BECKONS. The distance did not cut KC's ties to her mom's reel world. In an interview with PEP (Philippine Entertainment Portal) in August 2007, Sharon said, "My poor daughter, from the moment she was conceived without her knowledge or consent, was already a celebrity."

In 2003, she became a VJ for MTV Asia; and she gave acting another shot in 2005 when she played Belle in the stage play Beauty and the Beast.

KC's interest in theater was approved by her mom, who considered the stage less stressful than showbiz.

But soon KC made noise when she inked a deal with Human, a company under the giant clothing empire of Ben Chan.

After that five-million-peso endorsement, more brands—from shampoo to facial cleanser to feminine wash—clamored for her name.

Suddenly, the camera-shy mega-daughter's face was all over the place—television commercials, print ads, and billboards—even if Paris was her home base.

Her innate charm endeared her to Pinoy fans who could not get enough of her. Her spotless reputation and image attracted advertisers.

In October 2006, KC made news and then landed the cover of YES! magazine when she flew to the U.S. to visit her Papa.

The following year, she earned her degree, returned to the Philippines, and decided firmly to enter showbiz.

A TV special titled KC From Paris to 'Pinas, which aired last September 23, 2007, marked her official entry to Tinseltown. She signed contracts with ABS-CBN and Star Cinema.

He started playing minor roles, but even at the time, the public already predicted that he would make it big.

In 2004, the 20-year-old Richard was chosen to play the lead role in Mulawin, the first television series which strengthened GMA-7's position in Mega Manila.

The next four years, he topbilled Sugo, Captain Barbell, Lupin, Kamandag, and Codename: Asero. This year, he is set to do the TV adaptation of Zorro and Full House. Richard has been tagged the Primetime King of the Kapuso network.

KC IN SEARCH OF LEADING MAN. Year 2007: Richard was one of the most bankable stars of his generation. He was considered showbiz's "ultimate leading man."

KC, on the other hand, was every leading man's dream leading lady; she herself was on the lookout for a leading man.

The first time they were linked together was when rumor spread that the son of Annabelle was courting the daughter of Sharon.

KC was then in a relationship with TV director Lino Cayetano. She refuted the rumor. She told PEP on November 9, 2007, "Matagal ko nang kilala si Richard and he's a good friend. I'm shocked na may lumalabas palang tsismis na nanliligaw siya. It's not true din na we communicate a lot and go out on dates. It's simply not true."

Richard, who was rumored to be going out with Kamandag co-star Jewel Mische, also dismissed the rumors.

But on November 24, 2007, Richard was spotted at the Artists Fair Pilipinas III bazaar, which was co-organized by KC. She was there with her boyfriend Lino.

January 2008—news about KC's split with the TV director erupted. The following month, the hush-hush between Richard and KC became louder.

The prized talent of GMA-7 even gave the most in-demand star of ABS-CBN a Valentine's gift.

"Gusto ko step by step, proper timing, so tingnan na lang natin. Basta for now... masayang-masaya ako kung anuman ang meron kami. It makes me happy. Basta, I'll keep you posted for whatever will happen in my life," he clarified.

A few days later, KC admitted receiving a bouquet of flowers from Richard. In a First-Read-on-PEP item last February 28, she said, "I thank him for that. And I also thank the others that remembered me, to be fair, in fairness meron naman ding nakaalala sa akin."

But when asked if Richard was already courting her, she answered: "Ask him, ask him na lang. I don't know what his intentions are, but we're friends. If there's anything more that he wants out of it, then that's for him to answer, not for me..."

Her lovelife might have been on "pause" mode but her career was in full blast. There was no stopping KC from conquering the world of showbiz.

She made her TV acting debut via Maalaala Mo Kaya in February, then began working on her first album a.k.a. Cassandra. But movie plans for her were still hazy, and the biggest question-who will be her first leading man? Some write-ups dropped the names Piolo Pascual, John Lloyd Cruz, and Sam Milby.

Richard and KC had already discussed the idea long ago, over dinner when she was still in college, they both revealed. They revived the idea when she decided to become a movie star. Feelers started making the rounds in February.

Negotiations initially tracked the long and winding road. One of the hurdles were the respective schedules of KC and Richard.

On April 30, during the contract-singing of KC, Star Cinema hinted that the Richard-KC movie was possible.

On May 2, TV Patrol World confirmed that KC's first leading man in her first movie would be Richard.