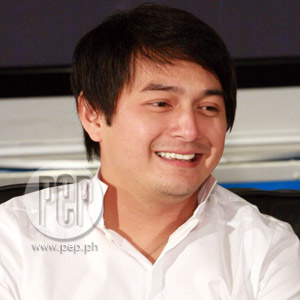 "She made life easier for me."

This could be one of the reasons the former bachelor actor decided to settle down with his girlfriend of four years. Dominic said that he has found the right person to spend the rest of his life with.

He further said, "Besides the age, that's part of it, pero parang I think it's about time. I've saved enough money for this day. And I think I've found the right person for me. She's not the perfect person pero ang akin, ang laki ng bagay na nagbago. Hindi naman binabago pero parang mayroon akong... It's hard to explain pero parang there's something in me na nakita kong I have to change for the better, if not for her, for me."

Dominic has always been very vocal about his plan to marry Denise. During his last interview with PEP (Philippine Entertainment Portal), he was all set, "I'm pretty much decided about it na." He wanted a civil wedding to first before the church wedding.

True to his word, the former Whattamen member tied the knot with his non-showbiz girlfriend through a civil rite in Makati City. It was a very private wedding, with only their close friends and relatives around.

This is also how Dominic wants their church wedding sometime this year.

"I want it very simple," he said. "I want it as simple as the civil wedding. But I've always wanted a celebration sa reception ko.

"Maybe just a breakfast wedding, then, sa susunod na linggo... 'Yong breakfast ko kasi, gusto ko kasama ang mga grupo ko—may mga nagmomotor, may mga kotse, mga club na I wanted to join me to a parade going to the church. I have a Range Rover Club, I have a Mini Cooper Club, I have a Volkswagen Car Club, I want them to join me to the altar. 'Tapos maybe on the way back, we'll drive a top-down, a convertible car, going home.

"I want it covered, coverage namin, I'll get someone to document it para the next week, sa reception, I want all to come up there. Because celebration is more on the after party. Parang may pagkain but I want it very casual. 'Tapos kahit sinong kilala ko at kahit sinong kilala niya [puwedeng pumunta].

There's no definite date for the church wedding yet. "Actually, we talked about it. We wanna talk about it this end of the month or before February 14."

What if the baby comes before the church wedding?

TELLING RICO YAN THE GOOD NEWS. During the interview, we found out how strong the bond between Dominic and his group Whattamen. His close friend Marvin Agustin was invited, of course, to the civil wedding

But it came as a surprise that Dominic even told his late friend Rico Yan about his wedding proposal. Rico, who was the third member of the group, died of acute hemorrhagic pancreatitis in 2002.

"The proposal was October 31st. November 2, that was a Sunday, I went to Rico's [grave]. Sinabi ko na sa kanya 'yon, that I proposed already, binalitaan ko siya," narrated Dominic.

He said that it had been a while since he last visited his late friend at the Manila Memorial Park. So, he thought that it was also the perfect time to visit Rico's grave and tell him the good news.

THE ACTOR IS BACK. Dominic admitted that his acting career in 2008 was down. "Last year was the slowest time. These are stuff na hindi natin ginusto, e."

But having time on his hands turned into an opportunity to be with his loved ones and to do things for himself.

This year, Dominic wants to give his all to acting again, saying positively, "I will try to be back and I'll try to offer something new this year. I'll try, it really depends on the project, too. Hindi mo rin maipapakita ang pagbabago sa'yo kung wala kang makukuhang project na maayos at maganda.

His comeback starts with ABS-CBN's newest teleserye May Bukas Pa, which opens on February 2.

"I think this is a good start for me," said Dominic. "I can't promise you 'yong mga susunod, but then I try to do my best whenever I'm given a role. Whether it's big or small, I try to give it 200 percent of my heart sa role ko. Hindi ako perpektong artista, hindi ako magaling, pero binibigay ko ang buong puso ko."