Karylle on being asked about Marian Rivera: "Time for change" 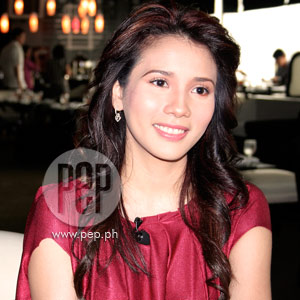 Karylle will stage a Valentine concert titled The Magic of Love at the Lobby Lounge of the EDSA Shangri-La Hotel in Mandaluyong City.

The breakdown of singer-host Karylle's relationship with actor Dingdong Dantes late last year undoubtedly had a profound effect on her personal and professional life.

Soon after the split, Karylle moved to ABS-CBN to join the Sunday musical variety show ASAP ‘08. She was then tapped to sing the Philippine National Anthem in Manny Pacquiao's boxing match against legendary Mexican-American fighter Oscar De La Hoya last December 7, 2008, at the Madison Square Garden in Las Vegas, U.S.A. An album slated for release next month is nearing completion.

Karylle will also have a concert on February 14, The Magic of Love, to be staged at the Lobby Lounge of the EDSA Shangri-La Hotel in Mandaluyong City.

Despite all these rosy developments, Karylle's past relationship continues to be a favorite tabloid subject among entertainment scribes. Her recent ad for Bench with the slogan, "Single Is Sexy," made Karylle the unofficial poster girl of the unattached—an image that on the flipside prompted cynics to say that she's still feeling bitter about the breakup.

In a conversation with Karylle last January 28 at the E Café of the EDSA Shangri-La Hotel, the daughter of Zsa Zsa Padilla admitted feeling tired of answering questions related to her past romance.

"And it's funny because I saw Crying Ladies and there was a scene where ‘yon nga, eksaktong ‘yon si Eric Quizon was explaining ng paulit-ulit, 'tapos sabi ko, ‘Ah, ito pala yong sinasabi ni Tito Audie na parang wake 'tapos paulit-ulit ka lang, makulit [sila], but you know sometimes people have to hear it from you."

BRIDGING THE GAP. Karylle feels that the painful breakup somehow broke a barrier between her and the public.

She explained: "Knowing that everyone knows what happened, ‘yon nga nawawala ‘yong wall completely. Kahit papaano you already shared so much with people na, ano pa itatago mo? It's not kasi may tinatago ka, I guess it's like kumbaga if you were acquaintances then naging friends na kayo. Ganun na yong level nung relationship ko with them."

Moving forward, of course, takes time and Karylle thinks that she's halfway there. "Hindi ko din alam," she smiled, "but I guess it's at that point where you can talk about it, laugh about it already and you know, not be in tears. Di ba sabi nila one day we'll just laugh about this. Feeling ko malapit na siya dun."

Maintaining a positive outlook plus having a stable support system composed of friends and immediate family members helped a lot when she was feeling low after the separation.

DARE TO GO DARING. Celebrating the freedom in being single doesn't necessarily mean Karylle is gearing up to pose sexy on print.

"Yong sa magazines, yeah, there have been offers, pero even before the Bench campaign came out," she sheepishly said.

Though she's not fond of the idea at the moment, Karylle safely reasoned out that she's not completely closing her doors to possiby appearing in a men's magazine.

"I think it is more of being fit and being confident of your body. Kasi before I used to think I was fat when I was in college. That's why when my classmates in college saw the [Bench] billboard they were like ‘E, hindi ka nga mag-sleeveless nung college', kasi akala ko yong arms ko malaki, hindi naman pala."

SINGLE AND HAPPY. For her upcoming Valentine concert, Karylle is not sure if Christian Bautista or Jericho Rosales—two men who are now being linked to her—will watch the show.

"If they want to watch, siyempre they are free to come. But I'm not expecting and my concentration kasi ngayon is dun sa concert talaga and not elsewhere."

During the presscon proper, Karylle pointed out that she's not thinking of suitors now, being keen on her career above all else.

Karylle would also rather not discuss Marian Rivera—the woman singled out in the rumor mill as the one purportedly behind the breakup.

One reporter painted an interesting scenario: "If one day, maybe tomorrow, naglalakad ka sa mall and nakasalubong mo si Marian, what will you do?"