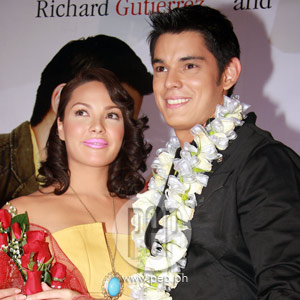 Last week, their second movie was released. When I Met U, the Valentine offering of GMA Films and Regal Films, focused on how the story would bring out the love team's sweetness.

FOR THE FIRST TIME. In the following months, Richard and KC subjected the public to a guessing game: Is their closeness for reel or real?

Some were skeptical and deemed their public appearances as mere hype for their upcoming movie. Something about their moves seemed "planned or staged."

Others were hopeful. Undoubtedly, the two make a lovely couple. Their customary spiel: "We're just in a getting-to-know-you stage." But showbiz fans wanted them to become a real-life couple.

The promo for the movie was very good—from the moment Star Cinema announced its special deal with GMA Films to reports left and right that the team-up also had the blessing of their respective families, to their sweet photos in Greece and their TV guestings.

Annabelle also made sure the movie would generate more than enough buzz. Upon learning that the birthday show of Dingdong Dantes and Marian Rivera was slated for the same night as the premiere of For The First Time, she cried foul.

Some fans found the fanfare created by the mom of Richard ineffectual because the movie didn't need it. KC and Richard had the backing of both networks. They were already bankable stars. They had a following at the time it was shown. Failure was definitely not in the picture.

True enough, a lot of people flocked the cinema last August 27 to be part of such important milestone in KC and Richard's career and in the history of movie making. It reportedly raked 15 million pesos on its opening day. It placed second in the list of Blockbuster Movies of 2008 in the country, and also did well in its international screenings.

WHEN I MET YOU. After the local and international run of the film, the two got busy with their own projects, and were dragged into separate issues—Richard in the bar altercation with StarStruck alumnus Aljur Abrenica and KC with the rumored spilt of her mom from her stepdad Kiko Pangilinan.

In December last year, news about their second team-up hit the press.

Joey Reyes resigned as director. A source told PEP that Direk Joey and top management of GMA Films had a disagreement over the script.

By January, KC and Richard started talking about the real score, which was "still-getting-to-know-you."

They were seen hanging out in Gerardo's, during Richard's birthday, but fans regarded it as purely a "publicity ploy."

The movie (And it all began...) When I Met U did not have a strong build-up, unlike the first one.

The teasers, trailers, and plugs went full-blast during the last part of January, barely three weeks before the playdate.

But as it turned out—the kilig was reserved for the actual movie. Production worked on a very tight deadline, but it was able to meet the intent: Pakiligin ang tao sa Valentine's Day.

It had its share of technical glitches, but fans didn't mind. PEPster Starbelle said, "Kapag manonood ka ba, papansinin mo ang cinematography, dubbing, ek ek? Of course not! It's a romantic comedy, not a period film or a movie which leveraged on location. It may not have a lasting impact, but it will surely leave a good impression."

The second movie of KC and Richard was breezy, hilarious, and realistically romantic. To read the REVIEW, click here.

Unconfirmed reports claimed that it earned 10 million pesos on its first day, and fans are positive that the film itself would create ingay in the coming days.

THE FUTURE FOR KC AND RICHARD. On a personal note, the two have what it takes to break box-office records. But popularity and talent are not the only requisites to a successful love team these days.

Look at the first team-up of John Lloyd Cruz and Sarah Geronimo. From the very beginning, promo had been honest in saying it was a big risk—baka walang chemistry.

But given the overwhelming results of ticket sales, the product did not disappoint the viewers. It had a weak opening day, but came stronger in the succeeding days.

In the case of Richard and KC, there's this added pressure of people setting high expectations.

I personally liked the first movie, though some found it "medyo mabigat sa dibdib." If the intent was to showcase the acting prowess of the two, then they succeeded. But the heavy portion somewhat overshadowed the light and romantic scenes, which the viewers wanted to see.

The opening was strong—some people waited for it, others were curious. But it had quite a feeble word-of-mouth review.

When I Met U was successful in the kilig aspect, but at press time, there's a hanging question: will it also succeed in creating a cumulative (both the media and moviegoers), positive response, which will prompt more crowd to flock the cinema?

The simple point here: Popularity, talent, and project should come together in one package.

Time should not be taken for granted. Publicity plan should be both strategic and straightforward.

A premium pair like what KC and Richard have would have people expecting a project that is first-rate.

Will there be a third movie?

Yet fans have another "impossible" request: a television team-up for Richard and KC for the roles of Capt. Barbell and Darna respectively. To date, the TV giants have not reacted to this clamor.

Anyway, just in case another KC-Richard project comes up in the future, fans want the best for their idols, of course.